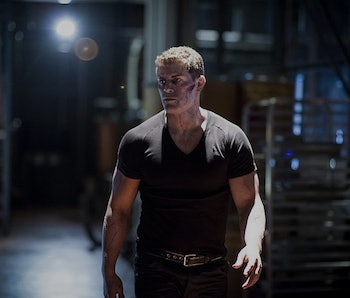 Another episode of Arrow, another session of Arrow: Vigilante School. Only this week, in “A Matter Of Trust,” the B-Team Arrow is taking a more advanced course in assault and battery. That means going into the field to stop a super-strong baddie who doesn’t feel pain. That’s apparently what the superhero curriculum looks like: Study a bit, fight a big dude. You have to walk before you learn how to crawl. You also have to roll with the punches. And the arrows. And the hockey masks. And the revelations that Felicity Smoak (Emily Bett Rickards) redirected a nuclear missile to your town.

But whether it’s “Introduction to Vigilantism” or “Advanced Superheroics,” the thread that keeps the plot bound together is “trust.” As expected, last week’s “Oliver Queen is the Green Arrow” reveal didn’t work any type of trust exercise magic when it comes to Rene (Rick Gonzalez) and his wildcard antics (whether you want to call them ignorance or stubbornness, as the show goes with the latter). In fact, Oliver (Stephen Amell) puts it best when he points out:

“Rene didn’t listen to what I said, and he created a superhuman.”

And that’s not just a normal, every day screw-up, even when your normal, every day job is as a costumed vigilante. That’s called being a liability at best and just plain bad at your job at worst. There’s a reason Rene ended up at the bottom of the Vigilante School class rankings last week, and he stays there this week as what he thought was just your run of the mill accidental killing of a drug dealer (which is already bad) turned out to be the accidental transforming of a drug dealer into a super-strengthened monster with an inability to feel pain (which is worse).

Then again, if you’re wondering it Arrow is really taking this all that seriously, look no further than the fact that the transformation occurred as a result of Rene dumping him into a vat of chemicals. That’s right: The villain-of-the-week is sent to his “death” in a literal comically large vat. So while Vigilante School may be in an advanced session this week, the way it’s all about the show taking a page from Comic Books 101.

That much-needed sense of levity really is the saving grace and driving force of “A Matter of Trust.” The show isn’t out of bad habit land — Thea doesn’t understand journalism, Felicity plays public defender after bad decisions get made, and vat-based origin stories are still absurd, but there are other weird notes struck. When Oliver, played by the man who brought back Teenage Mutant Ninja Turtles’s Casey Jones, has a very specific reaction to a vigilante in a hockey mask: “Cool.”

You know what? Yeah, it’s a bit cool.

It’s no coincidence that this all happens with Cody Runnels (former WWE Superstar Cody Rhodes) in the role of the beefed-up drug dealer. Cody has more than his fair share of familiarity with the over-the-top theatrics — it’s honestly in his blood. It’s certainly no coincidence that the drug he deals is Stardust either, as that was the name of Cody’s last gimmick during his time in WWE. And in what could easily be a thankless or even forgettable role, Cody’s given material that actually fits in quite nicely with the way this current rebuilding season of Arrow is working. It would be so easy to just make him a muscle-bound thug — both pre- and post-vat — but everything about him screams fascinating obstacle. He’s a cocky jerk and a reference-heavy one at that, which is especially unexpected. Sure, it’s easy to imagine a Damien Darhk or a Malcolm Merlyn quoting Mark Twain, but you don’t typically get that from a supposedly low-level villain of the week, especially when it’s followed immediately by a Lethal Weapon reference.

While Cody is welcome back anytime, he doesn’t defeat the Arrow-ettes physically or histrionically. He’s fun to watch, but so are they, and the team actually works together at the end. Sure, B-Team Arrow still isn’t long on character development, but they do seem to get along, which is something. There’s a charm to them working together, especially since they’re still so full of life and excitement for the gig. They haven’t had the chance to get jaded like Thea (Willa Holland) or Diggle (David Ramsay) or Laurel, who — to be totally fair — is dead. Plus, everyone has their role to play, and this episode truly capitalizes on that; it’s just like with the A-Team, only they’re the B-Team Arrow.

Oliver is the leader. Felicity is the brains. Curtis is the comic relief. But also the brains. And Felicity is also the comic relief. Evelyn (Madison McLaughlin) is the fighter, which isn’t the same as Rene, who’s the muscle. And Rory (Joe Dinicol) is technically the much-appreciated superpower. Alright, so maybe the team isn’t as well-defined into individual boxes as the A-Team, but that’s actually a good thing. Arrow’s grittiness may be what brought it to the dance, but when it’s able to let loose, even a little, the heart of the show actually reveals itself.

Because remember: There is literally a “vigilantes walking away from an explosion” moment in this episode, and that’s honestly one of the coolest things to happen on Arrow in ages.