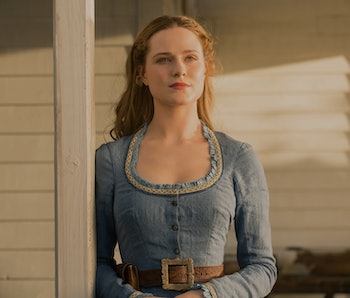 The robotic hosts of Westworld like Dolores Abernathy (Evan Rachel Wood) are supposed to adhere to strict causality loops of a handful of different interconnected scenarios. And while we’ve seen Dolores’s seemingly random sequence of events play out in different ways in the first few episodes, a file on the show’s Delos Incorporated site shows her predetermined narrative in full.

The host’s sequences are all programmed by the park’s narrative director Lee Sizemore and a bevy of other story programmers, who turn the almost-sentient hosts’ lives into brutally minimal flowcharts subject to the whims of the guests.

As it stands, every day she must first wake up at the ranch, then have a brief conversation with her father on the porch, then go to the Sweetwater general store in town, and then she must drop a can of milk as she’s about to get back on her horse.

From there, three further narrative scenarios could potentially happen to her.

She picks up the can and rides off:

Teddy (James Marsden) picks up the can and engages her in conversation:

Or a random guest like William (Jimmi Simpson) picks up the can and then must choose whether to go with her or not:

It’s all a very maudlin beginning that leads to something much more sinister. As Dr. Robert Ford tells her in Episode 3, she’s basically programmed so guests can choose to take advantage of her or not back at the ranch, which is the highlighted focal point of the narrative web. You can see that “Attack at the Ranch” is the prime objective of her narrative loop.

Take a look at all of Dolores’s scenarios below:

As we know by Episode 3, Dolores has wandered off her loop, this time taking revenge on the group who previously sexually assaulted her by killing the mustachioed bandit (a host, not a guest) she met in Sweetwater earlier in that particular timeline.

Despite the fact that she resets each day, she can remember things that happened to her before, which doesn’t bode well for Ford and Head Programmer Bernard Lowe’s fate-based time structure. Where will Dolores go next?