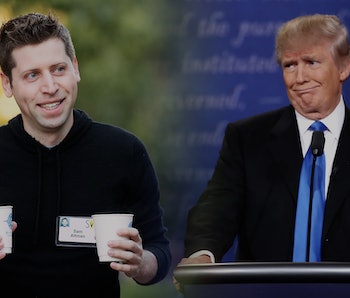 Sam Altman, the president of Y Combinator — one of the most powerful start-up incubators in Silicon Valley — tweeted on Sunday that he had a “new project to stop [Donald] Trump.” The project hasn’t been revealed as of Monday afternoon, but he did publish a blog post explaining why he supports Hillary Clinton — but he won’t fire his infamous Trump-supporting YC fellow, Peter Thiel.

Thiel, who is perhaps best known for bankrolling Hulk Hogan’s lawsuit that ultimately led the death of Gawker, is a part-time partner at YC, which helped launch major startups like Dropbox, Airbnb, and Twitch. Earlier this week, Thiel gave $1.25 million to Trump’s campaign, leading some diversity-minded partners to declare they wouldn’t be working with YC anymore.

Altman took to Twitter over the weekend to respond to vocal calls for him to cast Thiel out from YC. “Thiel is a high profile supporter of Trump. I disagree with this,” he wrote, a couple tweets into a somewhat lengthy tweetstorm. “YC is not going to fire someone for supporting a major party nominee.”

He closed by tweeting that he would be “back to work tomorrow on a new project to stop Trump.”

On Monday, Altman uploaded this blog post titled simply “The 2016 Election.” The post lays out the reasons why the influential Silicon Valley investor was endorsing Clinton and decrying Trump — but not his supporters.

In an email to Inverse, Altman clarified that the post wasn’t the project he had been tweeting about, but “something else,” adding “btw I also founded voteplz,” a non-partisan website launched late this summer that helps Americans register to vote.

“The only two vocal Trump supporters I am close to are Peter Thiel and my grandma,” Altman wrote in his blog post on Monday. “This has been a strain on my relationship with both of them — I think they are completely wrong in their support of this man.”

After restating his belief that firing someone for their political allegiance was a Pandora’s Box of bad ideas (though he would sever ties with Thiel if he “said some of the things Trump says himself”), Altman explains the larger philosophy behind his ideals. “The way we got into a situation with Trump as a major party nominee in the first place was by not talking to people who are very different than we are,” he wrote.

“If our best ideas are to stop talking to or fire anyone who disagrees with us, we’ll be facing this whole situation again in 2020,” Altman continued.

Y Combinator’s connections with Thiel, a major enemy of a free press and big-time monetary supporter of an extremely troublesome candidate, remain concerning, but Altman’s point has some merit to it. Odds are this diplomatic philosophy will factor into Altman’s project, whatever that ends up being.

More like this
Culture
Jan. 14, 2023
2,454 years ago, one eerily familiar event led to the downfall of Ancient Athens
By Rachel Hadas and The Conversation
Gear
23 hours ago
How to lock down your iCloud with Apple's Advanced Data Protection
By Alyson Velati
Entertainment
10 hours ago
Where and how to watch the 2023 Oscar nominees
By Mónica Marie Zorrilla
LEARN SOMETHING NEW EVERY DAY.
Related Tags
Share: