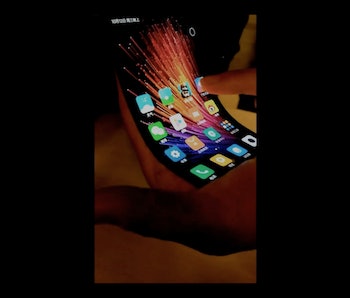 Did you just receive your iPhone 7 Plus or Google Pixel in the mail? Well, tough luck: It’s already outmoded, and, after laying your eyes on this Xiaomi gadget, you’ll never look at your brick smartphone the same way. If the video is legitimate, Xiaomi is making (and soon selling) a cardboard-thin smartphone, with touchscreen, that either comes in a unique shape or is bendable.

Bendable displays have long been in the headlines, and for good reason: They’re like magic, and so opposed to all current technologies, that people cannot help but marvel. Before the Xiaomi, there were a few E-ink Readers that could bend and twist. But to do the same to a smartphone is a whole new ballgame, an impressive engineering feat. E-ink Readers are relatively straightforward, mechanics-wise, whereas smartphones are complex.

The video does not make clear whether the phone comes pre-bent, to fit nicely in the user’s palm, or if it is pliable. (It looks thin enough that we’d believe the latter.) If it’s the former, it’s not an earth-shattering innovation, just a neat novelty; if the latter, it is earth-shattering.

9to5Google reports that it could be the Xiaomi Mi Note 2, which the company is set to release on October 25. Judge for yourself: