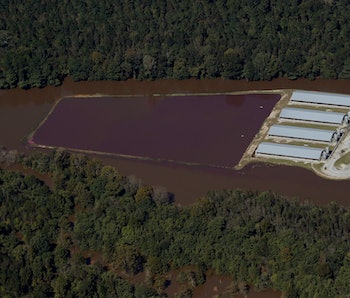 Waterkeeper Alliance captured dramatic aerial photos of the overflowing poo pits this week. “Some of those lagoons were so submerged that we didn’t even know they were there when we photographed them,” Rick Dove, who took the photos, told Mother Jones.

Hog shit contains high levels of nitrates, which are harmful to animals, humans, and the environment in large concentrations. Nitrates from agricultural runoff is a primary cause of harmful algal blooms and widespread dead zones in ocean environments. The sludge may also contain antibiotics and pathogens like salmonella, including antibiotic-resistant bacteria. According to Waterkeeper, North Carolina produces 10 billion gallons of animal waste every year — enough to fill 15,000 Olympic-sized swimming pools.

Flooding has also killed as many as five million chickens, according to Reuters. So, until that mess gets cleaned up, add rotting bird carcasses to the list of stuff contributing to the toxic runoff, which may flow into local river systems, groundwater, and the ocean.

North Carolina is home to 4,145 animal waste pits covering 6,848 acres of land. Of those, 136 are within 2,500 feet of a public water well and 170 are in flood-prone areas, Waterkeeper Alliance reports.

“The introduction of vast quantities of untreated waste into North Carolina’s waterways leaves tens of thousands of rural residents susceptible to air and water quality contamination,” the organization writes in a blog post. “As climate change causes more and more of these devastating weather events, we simply cannot afford these continued assaults upon North Carolina’s waterways and communities.”