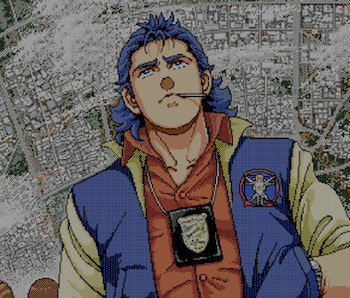 Policenauts, Hideo Kojima’s 1996 interactive sci-fi detective story, wasnt available in English until 2009 when a group of dedicated fans at Junker HQ released a translation patch for the game’s PlayStation port. Since Konami never officially localized the game, English-speaking players had to make do with this, dealing with some cut content and other issues. No longer.

Earlier this month, the Junker team finished work on a patch for the “complete” Sega Saturn edition, making it possible to finally play Policenauts in its entirety without a working knowledge of Japanese. If you’re a fan of Kojima’s brand of storytelling, you’ll want to check it out.

Over at Policenauts.net, the team has released very detailed instructions on what you need to do to get the game up and running on your PC (or Mac), and it requires a little bit of legwork. The patch itself is a series of files that must be applied to the game’s .iso and .cue files, which means you’ll need to do a little bit of command line tinkering to ultimately replace the Japanese with English text.

As for getting the game to work, it took me about an hour to muddle through the process and get it working on my MacBook Air with no coding knowledge whatsoever, though the process is actually short and relatively simple. If you follow the instructions, you shouldn’t run into any major issues. Just keep in mind they include extra steps to rip the necessary files from actual Policenauts discs, which you can skip if you feel comfortable finding the .iso files needed for emulation online.

And what does playing Policenauts feel like 20 years after its release? If you can stomach the point-and-click interface, it holds up pretty well. The pixel art of the Saturn release is great, particularly in the game’s light gun shooting sections, a holdover from Kojima’s Snatcher. Junker should also be commended on their stellar translation work, which captures the voice and tone of the game’s hardboiled protagonist with what I can only imagine is extreme authenticity; and it helps make up for the age of its design. Even two decades later, this is definitely a Kojima game.

Need more convincing? Right off the bat there’s relatively blatant references to Blade Runner, Lethal Weapon, and 2001. Some things never change. Now you have no excuse to not see it for yourself.