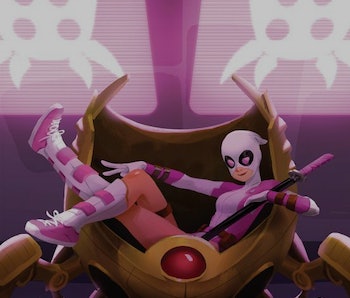 Today is the perfect day to enter Gwenpool’s world.

On October 12, Marvel released Gwenpool #7, starting a new story arc. That means the stars have aligned for new readers who want to jump into Gwen’s candy-colored bloodbath. Like Deadpool, Gwenpool is a comedic superhero who cavorts around wildly, stabbing villain after villain with her katana until she turns and gets you, her reader, right in the feels.

Marvel is famous for its wacky experiments, and some of them work better than others. Gwenpool, an unapologetic female version of Deadpool, first appeared in Marvel’s female-hero-heavy holiday special, where she annoyed the crap out of characters like She-Hulk and Hellcat. After Marvel was overrun with fan art and meticulously detailed Gwenpool cosplay, the publisher announced a Gwenpool solo series. That series, The Unbelievable Gwenpool, has been happily selling out its issues ever since, but it’s about time Gwenpool got her full due. She’s not just a trivial knockoff of everyone’s favorite Merc with a Mouth.

Like Deadpool, Gwen Poole comes from an alternate universe where she’s already learned about every single Marvel hero and villain. That means her comics are full of frequent asides to the reader — she knows she’s in a comic book, and she knows you’re lost in Marvel’s multiverse, potentially in need of quick pointers on who everyone is and what they want.

In fact, Gwenpool had us hooked by the final panel in her first issue, which proved that a goofy character could still be confronted with the darkest corners of Marvel’s multiverse. After setting up a mild-mannered tech geek as Gwenpool’s sidekick, Marvel killed him off in a gruesome twist, leaving Gwenpool cradling his skull in her arms and submitting to his killer. The series rocketed forward from there, picking up new readers as it went.

Gwenpool #7 is available online now, and Issues 1-6 can be purchased at local comic book stores, or on Marvel’s website.

More like this
Culture
6.29.2022 10:00 AM
6 years ago, Marvel released its most incoherent sequel ever
By Graeme McMillan
Entertainment
6.24.2022 11:15 AM
Behind the scenes at “Herogasm,” The Boys’ most NSFW episode ever
By Aaron Pruner and Jake Kleinman
Entertainment
6.30.2022 7:00 AM
The Boys Season 3 Episode 7 release date, time, plot, cast, and trailer for the Amazon show
By Jeff Spry
Related Tags
Share: