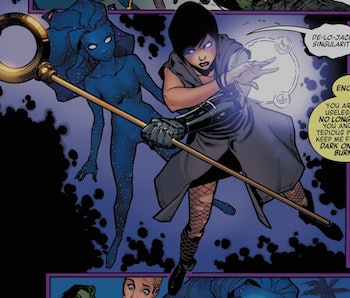 Let’s say, hypothetically, you want to debate a comic book fan who hates when Marvel redefines one of its superheroes as being anyone other than a white man. You might point out that Iron Heart hasn’t hit stands yet, so no one knows if it’s any good. You might ask the offended person if they’ve actually read, say, Ms. Marvel or Mighty Thor or Spider-Gwen or Marvel’s Christmas issue, which featured both Gwenpool and She-Hulk, because all of those initially controversial series are actually pretty great.

The conservative comic book fan may ask, “Why doesn’t Marvel just create new characters who are people of color or genderqueer, or women?”, to which you can say, “hey idiot, they’ve been doing that too, for decades. Where have you been?” Here are the best original Marvel characters created since 2000 who are either queer, a person of color and/or a woman. None of them are tributary heroes trained by classic heroes — although there’s certainly nothing wrong with Cassandra Cain’s Batgirl, Spider-Gwen, Iron Heart, X-23, or Samantha Wilson’s Captain America. These characters have the unique, independent backstories and career trajectories that Marvel critics say they’d prefer over temporarily switching a character’s gender or ethnicity. That move, by the way, has been Marvel and DC’s modus operandi since, well, the beginning.

We decided not to include new characters like Lunella as Moon Girl, America Chavez as Ms. America, or Kamala Khan as Ms. Marvel, as all of those monikers previously belonged to white, female superheroes. These characters are pure OGs.

Cindy Moon first appeared in comic books in June 2014, as a classmate of Peter Parker’s who is also bitten by a radioactive spider — the same, in fact. By September 2014’s issue of Amazing Spider-Man, Cindy had taken on the Silk persona. The final panel in that comic depicted Peter Parker and Cindy Moon kissing, after Parker admitted he felt an opposite sort of Spidey Sense drawing him to her all the time.

Silk is included in this list because she has a rich backstory, and a solo series, that doesn’t involve Peter Parker, the genesis of the Spiderverse, at all. She’s also Korean American.

Koi Boi, whose actual name is Ken Shiga, was created in 2015, when they appeared in the sixth issue of Unbeatable Squirrel Girl. Though Doreen Green, the comic’s protagonist, gets a ton of attention from critics and fans, Koi Boi has their own appeal, as an even more ridiculous superhero than Squirrel Girl.

Shiga is also a great example of graceful, funny representation of transgendered people in kids’ comics. They simply spell their superhero name as “Boi”, rather than “Boy”, and in one panel appears to be wearing a binder. Creating a transgendered superhero, and allowing them to be funny without making their gender identity or expression part of the joke, was one of Marvel’s finest moments in 2015.

Technically, Angela was created by Neil Gaiman and Todd McFarlane in a 1993 issue of Spawn, which puts her origin off our lists’s time constraints. However, Gaiman won the rights to produce her character in future comics and sold them to Marvel. Her first Marvel appearances occurred in 2013 and 2014, which means the iteration most fans are now familiar hasn’t been around very long. Also, the 2014 “Original Sin” storyline gave her a defining characteristic that has stuck: she’s Loki and Thor’s sister.

Sooraya Qadir first appeared in Marvel Comics in 2002, as an Afghani member of the Young X-Men. After being rescued by fellow mutants, she begins training in the United States as a superhero.

Qadir’s Muslim faith isn’t portrayed as a negative trait in the comics, which in itself is rare, but her traditional clothing has been the subject of some controversy, both in-world and out. While she technically wears an abaya with a niqāb, the other young mutants repeatedly refer to Qadir’s clothing as a burka. Gentle, another mutant, finally corrects them. Unfortunately, some Marvel artists have drawn Qadir’s clothing as skintight, which of course defeats the intented purpose of wearing an abaya.

The members of the runaways began their tenure in comics with a solo series in 2003. Low issue sales caused the series to be discontinued within a year, but the high sales of the trade paperback saw a revival in 2005.

Notable among the original, non-white-male characters in the series are Nico Minoru, a straight Japanese girl, Karolina Dean, a white lesbian girl, and Alex Wilder, a young black teenager. Nico went on to star in several spin-off comics, and is currently a member of Marvel’s all-female Avengers, A-Force.

The mutant Megan Gwynn first appeared in a 2004 issue of X-Men, and she is currently a member of A-Force. Her wings give her flight, she can produce hallucinogenic dust, and can teleport and banish demons from her plane.

Her backstory includes a childhood spent in a low-income Welsh mining town, and she was educated at the Xavier Institute.

Singularity, a female-presenting cosmic being, first appeared in the premiere issue of A-Force in 2015. She is similar to DC’s Starfire in disposition, often stumbling over her words or guessing incorrectly at human nature.

Because she’s able to alter her shape and size, and because she’s not technically an organic being, she has the ability to transport many people at once, inside of her, through different galaxies. When she last appeared in A-Force, Singularity detonates herself in order to save her fellow superheroes, and it’s not clear whether she’ll recover in future comics.