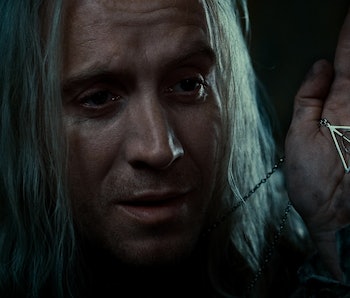 We already knew Percival Graves wasn’t a good guy in Fantastic Beasts and Where to Find Them, but thanks to new character posters, we now know that he’s connected to the legendary and dangerous magical artifacts known as the Deathly Hallows. This could mean that any of the three hallows — the Elder Wand, the Invisibility Cloak, and the Resurrection stone — could appear in the new movie.

In Graves’s poster for Fantastic Beasts, he looks much like he has in every trailer: stone-faced and slightly menacing. But what’s really interesting about the poster is what’s in the background, just over his right shoulder: a necklace with the familiar sign of the Deathly Hallows.

Why this symbol is showing up in the context of Graves is unclear. Is this the very same necklace we saw around the neck of Luna’s father, Xenophilius Lovegood, in the Deathly Hallows? If so, how the hell did Lovegood get ahold of it over half a century later? And if it’s not the same necklace, why are there a bunch of Deathly Hallows necklaces floating around? And what purpose do they serve?

In Harry Potter and the Deathly Hallows, Lovegood explains the necklace to Hermione, Ron and Harry after he’s accused of being a dark wizard for wearing the symbol. He says, “There is nothing Dark about the Hallows — at least, not in that crude sense. One simply uses the symbol to reveal oneself to other believers, in the hope that they might help one with the Quest.”

It seems likely that if the necklace is showing up with Graves, he may very well be in pursuit of the Deathly Hallows, planning to use the power they provide when combined for his own purposes. But it’s worth noting that he’s not wearing it. Is he simply after someone who’s after the Hallows? If so, who? And why?

Could Graves be our connection to Grindelwald in Europe? The symbol is often associated with Grindelwald, as evidenced by Viktor Krum’s accusation at Bill and Fleur’s wedding at the beginning of Harry Potter and the Deathly Hallows. In any case, it looks like Fantastic Beasts and Where to Find Them is going to give us the beginning of that dark (if misunderstood) connection between the Hallows and the rest of the Wizarding World.

Fantastic Beasts and Where to Find Them arrives in theaters November 18.