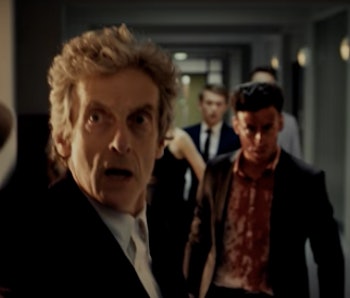 Peter Capaldi’s Time Lord from Doctor Who will appear in the first episode of the new spin-off Class, but don’t expect to see any familiar alien adversaries on the upcoming show.

At BBC America panel at New York Comic-Con on October 7, Patrick Ness — the creator and writer of Class — responded to audience questions about seeing familiar aliens on on the new show. “If you had the chance to make brand-new Doctor Who monsters, wouldn’t you run with it?” he said, dispelling any hopes that the cast and characters of Coal Hill School might clash with Daleks, Cybermen, or Weeping Angels.

“Our show is about what happens when the Doctor is done with you,” Ness said, “If you don’t have the Doctor with you, you might not know what everything is.” This notion that Class will stand on its own seems like kind of a mixed message, since no other Doctor Who spin-off before (there have been more than you think) has ever featured the Doctor in the pilot episode.

Meanwhile, the trailer for Class showcases Capaldi as the 12th Doctor quite a bit, complete with a shout-out to him being the school’s former “caretaker,” an undercover role he assume at Coal Hill School in the Season 8 episode, “The Caretaker.”

“It’s a show with its own voice,” producer Brian Minchin said. “It’s still in the world of Doctor Who … which is a universe that is endlessly rich and rewarding.”

So if it’s not the Daleks or even one-off aliens like the Skovox Blitzer, who and what will the young characters on Class and their ray gun-toting teacher friend Miss Quinn — be dealing with? The trailer mentions “shadows” quite a bit, but whether these are aliens or just metaphors for aliens is unclear at the moment. There’s also something that looks like the “crack” in the universe that shows up, which is very reminiscent of the crack in Amy Pond’s wall from Doctor Who Season 5. But Ness was adamant all of these things from the Class trailer are indeed new and not cameos from other aspects of Doctor Who.

“I think cameo appearances are like a penis: if you put it in a scene, it’s all anyone looks at,” Ness explained. “I prefer to hide easter eggs in a cool way. There’s going to be stuff you like.”