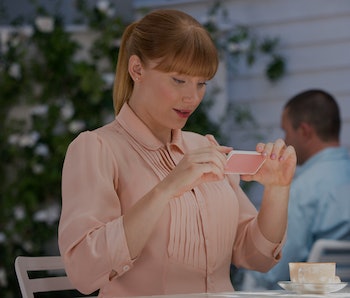 The only thing scarier than the future is the present day, and Charlie Brooker’s anthology series Black Mirror is here to tell you why. The trailer for Season 3 of Black Mirror just hit, and despite the sudden appearance of some A-list actors, it looks like the show will be bleaker than ever.

After the first two seasons of the show premiered on Channel 4 in the UK, streaming service Netflix bought the rights for the third batch of six episodes. Season 3 will premiere on October 21 worldwide, carrying over the themes from previous seasons. Each episode presents a potentially horrific tale of the “techno-paranoia” of the 21st Century, according to Netflix. Past episodes of Black Mirror often present worlds that are close enough to our own to be relatable, with one major difference, like neural implants that can play back memories, that lead characters into difficult and often disturbing moral quandries.

Bryce Dallas Howard, Gugu Mbatha-Raw, Alice Eve, Mackenzie Davis, and Kelly Macdonald will all appear this season, and Joe Wright (Atonement, Dan Trachtenberg (10 Cloverfield Lane ) and James Watkins (The Woman In Black) are in the director’s seat for particular episodes.

Brooker wrote the majority of the episodes, but the premiere, entitled “Nosedive”, was co-written by Rashida Jones and Parks and Recreation creator Michael Schur. Maybe we’ll get to laugh and be horrified at the same time.

Check out the trailer below:

There are no official descriptions of each episode just yet — Netflix and Brooker probably want to save the surprises for each creepy cautionary tale — but the show’s creator did spill some information about each to Entertainment Weekly.

Here’s just a bit of what to expect from each episode this season:

An insecure office worker (Bryce Dallas Howard) lives in a world in which everyone obsessively ranks and rates every tiny social interaction. She thinks she finally may have found a way to rank alongside her friend (Alice Eve), whos one of society’s elites

“Shut Up and Dance”

A withdrawn 19-year-old (Alex Lawther) stumbles headlong into an online trap and is quickly forced into an uneasy alliance with shifty man (Jerome Flynn) who are both at the mercy of persons unknown.

A thrill-seeking globetrotter (Wyatt Russell) visits Britain, hooks up with a woman (Hannah John-Kamen) and tests the latest in video game technology.

“Hated in the Nation”

A police detective (Kelly McDonald) and her geeky young sidekick investigate a string of grisly murders with a sinister link to social media.