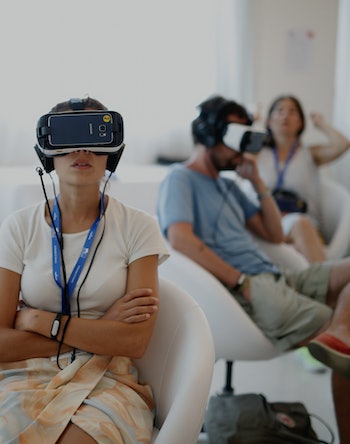 This past March at the Game Developers Conference, an event that brings together developers from around the world to San Francisco, Patrick Harris, lead game designer at Minority Media, made it clear that things would get ugly during his talk on consent in virtual reality.

The audience was aware that harassment in massively multiplayer online (MMO) games — like the virtual reality one Harris was demo’ing — had become a problem. But what Harris was about to show them was “way, way worse,” he warned, reported Polygon.

“They can lean in and touch your chest and groin and it’s really scary,” Harris told the audience.

But the video Harris proceeded to show the audience wasn’t of himself. In order to see exactly just how bad harassment could get in the virtual reality space, Harris showed a video of a woman — who was not warned of the possible outcomes — being harassed in VR.

Unsurprisingly, Harris found that the woman’s reaction being groped in a MMO game was one of fear and discomfort. What was scarier was that Harris (who later apologized for the incident) seemed to think that testing sexual assault on an unassuming woman was okay to do in the first place. Minority Media did not return requests from Inverse for an interview.

Robert Yang, an indie game designer and professor, who was at the event had a different sentiment. “You shouldn’t have had to harass her to know that was not okay. Imagine the whole world was VR. It’s a huge scare.

As the Minority Media demonstration showed, video games, a combination of actual interaction, decision-making, and pure fiction can be one of the trickiest battlegrounds.

“In a lot of popular mass-market video games there’s a romance and you complete your quest and they fall in love with you,” Yang tells Inverse, describing the “kindness coins” theory of romance that has long dictated romantic gameplay. “We often don’t know what the other person wants.”

Thats why he developed Hurt Me Plenty, a short motion-control game about consent and kink. The game allows the player to spank a man in the game using a Leap Motion controller. But Yang included a mechanism to lock out players that didn’t pay attention to the man’s needs and also gives players a chance for “after care” (the time after a kink scene during which partners attend to each others psychological, physical and emotional needs). Adopting the principles of BDSM in a game might just sound like kinky fun, but it was a way to demonstrate what consent could look like in a controlled game environment.

“The power relation between a video game and a player is very unequal,” says Yang. In his game, equality is embedded in the design.

It’s not likely there will ever be universal understanding of consent. Humans have forever misunderstood each other. But a recent poll found that 40 percent of college students agreed that undressing, getting a condom, or nodding is consent. And while the Rape Abuse and Incest National Network doesn’t define consent as exclusive to a verbal agreement, a “yes means yes” definition is increasingly the norm on college campuses.

In the virtual world, there have been numerous reports by female users of being harassed in VR spaces. “Virtual Reality Is Full of Assholes Who Sexually Harass Me” reported Mic after the Harris incident. This bad behavior is all in spite of community standards barring harassment: A June thread in the r/oculus subreddit included claims of harassment of female users on the popular platform AltspaceVR. While many commenters had suggestions on how to fix the problem, others were less sympathetic, claiming that “having such rigid and harsh controls in place will kill social VR” and more bluntly, some were “PRETTY SURE IT’S NOT A BIG DEAL”

Of course, virtual reality games aren’t just a problem to be fixed. Some are offering themselves as part of the solution. For example, the Quebec government has already invested in a virtual reality PSA against harrassment: Viewers step in the shoes of a woman whose consent is ignored during a date. The video is being promoted through the YWCA through next year.

Alison Cole, who’s had an interest since coding a Spice Girls RPG at ten years-old, has designed a game called In Tune that serves a similar purpose:

“The way that people can interact in a game alleviates some of the severity and heaviness,” Cole tells Inverse.

Though Cole works specifically with games that are a hybrid of digital and analog tech, she believes augmented reality raises important issues. She also cited the Minority Games incident as an example of why developers need to understand consent.

Designers like Cole and Yang provide players with features to “opt out” and make a “no” function in the game as systematic as activists in the real world.

Some are hopeful that virtual reality could even give people a way of understanding consent when people are unplugged.

“Everyone wants to know what everyone else really does in bed.”

“It’s a lot more comfortable to talk about the hardware side of sex tech,” says Gallop, who notes that teledildonics (computer-controlled sex toys) and sex robots as examples. “What is being neglected is the software designed to bring us together for better lives.”

VR can change perspectives, too, she says.

“When you have the experience of what it is to be the penetratee not penetrator that changes your worldview.”

If funding is a challenge for typical startups, startups working with sexual content face even bigger obstacles. Everything from building a website to getting investments becomes a hassle when you’re working with anything labeled “adult content,” Gallop says.

“As soon as someone wants to fund us, I’m so there,” says Gallop. “At the moment VCs are flinging millions of dollars at VR in far more trivial contexts like games. I would love to have a piece.”

It’s promising that such engaged discussions about consent are happening well in advance of the VR becoming commonplace. And it’s not too late for investors to tune in before they spend their next billion. There’s also plenty of time for developers like Harris to test out VR games like In Tune to see how consent feels from the other side.