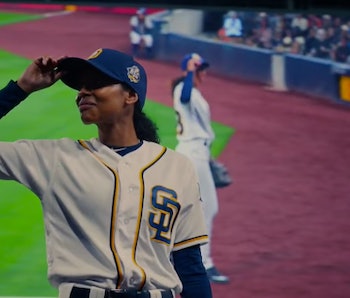 The not-terribly-secret weapon in Ginny Baker’s arsenal on Pitch is her screwball. It doesn’t have to be a secret because it’s effective, it’s uncommon, and it’s pretty damn hard to hit — even when batters know it’s coming. So how and why does it work?

Screwballs, curveballs, and sliders are all pitches that take advantage of spin to create a curving arc as they travel toward home plate. But, think of the screwball as essentially the mirror image of a curveball. They’re thrown in much the same way, with pitchers simply adjusting the angle of their wrists. Where a curveball drops and breaks left (because a pitcher’s wrist is cocked left) over the plate, a screwball drops and breaks right (because the pitcher’s wrist is cocked right). Most pitches break just before they reach the plate, which makes them hard to hit and, by extension, very effective for pitchers.

So, what Ginny lacks in speed on the fastball, she makes up for in proficiency with the hard-to-hit screwball. But, in terms of physics, what’s actually happening on the ball’s journey from the mound to home plate and what makes it break like that?

It’s all in the spin.

When pitchers cock their wrists to throw a curveball or screwball, what they’re doing is imparting spin on the ball as they release. In a curveball, the ball’s spinning counterclockwise. In a screwball, it’s spinning clockwise. That’s what causes the ball to break either right or left. But, there’s a little more to it than that and it comes down to what’s called the Magnus effect.

What makes the screwball so effective is that it’s extremely difficult to tell that a pitch is a screwball until it’s breaking, and by then it’s almost too late to react. To read a screwball early, you have to get a read on the pitcher’s wrist, and a good pitcher’s good at disguising it.

So … why doesn’t everybody just throw screwballs all the time if they’re so effective?

Part of why this pitch works for Ginny is because it isn’t used that often and it’s difficult to master. It’s something of an outlier. In the IRL MLB, there’s just one pitcher, Hector Santiago, who pulls out the screwball with any regularity. The pitch might be tough on a pitcher’s wrist and arm, so it’s not as if pitchers like to lean on it heavily these days.

It’s not just screwballs that benefit from the Magnus effect and the wonders of fluid mechanics. It’s at work on curveballs, fastballs, sliders, golf balls, basketballs, tennis balls, and on plenty of things that exist outside the sporting world.

Ginny Baker’s using physics to even the playing field despite her fastball being not quite as fast as most of the other pitchers in Major League Baseball. That’s working smarter, even though Ginny’s proven she’s just totally cool with be the hardest worker in the room, á la the Rock.

More like this
Science
5.14.2022 7:00 PM
Why scientists think physics could be in for a reckoning
By Roger Jones and The Conversation
Innovation
5.8.2022 12:30 PM
How the new Large Hadron Collider experiments could change physics forever
By Sarah Wells
Science
5.8.2022 10:00 PM
Real-life time travel hinges on this one controversial scientific theory
By Barak Shoshany and The Conversation
Related Tags
Share: