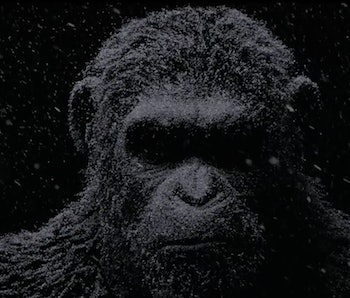 Next year’s War for the Planet of the Apes might not just depict intelligent apes blowing things up, but it could also render a devastated Earth ravaged by a nuclear winter.

While the snowy new teaser from the upcoming sequel to Dawn of the Planet of the Apes doesn’t give us much more than the heroic ape leader Caesar saying, “Sorry … but the war has begun,” the snow surrounding him could imply a hardcore post-apocalyptic setting for the film. If for some reason human or ape forces detonated numerous nuclear weapons around the same time, the longtime result could have created a catastrophic new ice age with extremely cold weather. We’re not sure when War takes place after Dawn of the Planet of the Apes, but if it’s long enough in the future, nuclear winter is definitely possible.

The teaser also has Caesar totally getting blown away at the end. Could this mean Caesar himself is dead by the time the events of War for the Planet of the Apes gets going?