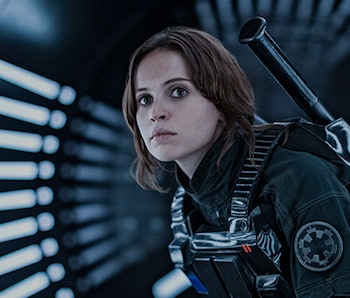 From the very first trailer for Rogue One: A Star Wars Story fans have wondered why Jyn Erso was rocking an Imperial jumpsuit, and now we know for sure. It turns out Jyn Erso is not wearing a TIE Fighter pilot’s jumpsuit — instead, she’s disguised as part of an Imperial ground crew.

This latest detail comes from offical representatives at Hasbro, speaking on October 8 from a panel at New York Comic-Con. Steve Bono of Hasbro said, “It wouldn’t be a Star Wars movie or a Star Wars toy line unless someone was disguised as one of the bad guys.” Bono, along with his colleagues Steve Evans, Joe Ninivaggi, Aditi Ratura, Sam Smith, and Andy Ochiltree, discussed many of the new action figures for Rogue One, which of course creates sideways reveals about what the characters themselves are in the movie. In regard to Jyn’s ground crew disguise, it seems like the she’ll infiltrate the Imperial Base on Scarif where she’ll presumably steal the Death Star plans.

The Hasbro team also discussed the new Mon Calamari in Rogue One, Admiral Raddus. Previously just glimpsed in the Star Wars Celebration footage, it sounds like Raddus might have a bigger role than previously believed.

The group also talked a bit about Darth Vader’s outfit in Rogue One and that it will be in line with Episode IV. (An end to #cloakgate?)

Finally, the team talked a little bit about the Rebel Bodhi Rook and his newly reveald giant backpack.

Apparently Bohdi will the gadget guy of the Rogue One squad which caused the panel to dub him “the Donatello of the Rebel team.” To be clear, we’re pretty sure this was just an analogy and that a Teenage Mutant Ninja Turtle/Star Wars crossover is not actually on the table.