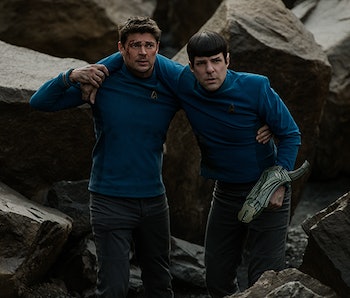 Young Spock of the Kelvin timeline is an almost totally different person than Old Spock — mostly because he’s a lot better at making friends. Young Spock’s friendship with Dr. Leonard “Bones” McCoy in Star Trek Beyond has developed over the past three movies, giving more weight to the human side of Zachary Quinto’s half-Vulcan Starfleet officer.

A new behind-the-scenes clip on Cinema Blend goes further into how the developing friendship between Spock and Bones has changed in the contemporary timeline and created a softer side of Spock. The original Spock (Leonard Nimoy) was the pinnacle of neutrality. Even though he’s also half-human, this Spock leaned heavily into his Vulcan side of choosing to practice logic instead of emotion. Because of this preference, the colder, original Spock clashed more heavily with Dr. McCoy (DeForest Kelley), who was stubborn, intense, and full of emotion.

While the newer Bones (Karl Urban) is more or less the same as his earlier counterpart, the new Spock (Zachary Quinto) is far more attuned to his emotions than his predecessor. This is partially because of how developed Spock’s connection to his human mother (Winona Ryder) was depicted in the 2009 Star Trek film. Even though she died early on in the first Star Trek film, you could tell Spock valued and loved her in a way that didn’t really come across in Nimoy’s portrayal. Not to say Nimoy’s Spock didn’t care for his mother; he surely did, he just chose logic over affection.

We’ve also seen Spock’s emotions blossom through his relationship with on-again-off-again girlfriend Uhura (Zoe Saldana). Even though they’ve had problems, she’s the only person on the ship who’s really understood his complexities, and he’s opened up to her in ways he hasn’t with anyone else, at least, until recently.

In Beyond, one of the strongest moments in the movie comes when Bones comforts Spock, who’s still reeling from the death of Spock Prime from the original universe. For all intents and purposes, Spock shouldn’t be as forlorn as he is since Vulcans would likely show respect for his loss as being a natural part of life. However, that moment of vulnerability gives Bones an opportunity to be there for Spock in ways we haven’t seen before between these characters. After all, dammit, Bones is a doctor, but he’s a caring doctor who will be there when someone needs him.

Star Trek Beyond is currently out on digital release, and will be distributed on DVD and Blu-ray November 1.

More like this
Entertainment
7.2.2022 4:00 PM
Next Exit is the existential road trip sci-fi fans need — here's why
By Eric Francisco
Entertainment
6.29.2022 10:30 AM
25 years ago, Nic Cage made his most explosive sci-fi movie ever — it was almost even better
By Jake Kleinman
Science
6.20.2022 2:00 PM
The darkest sci-fi movie on Amazon Prime reveals a controversial robotics debate
By Tara Yarlagadda
Related Tags
Share: