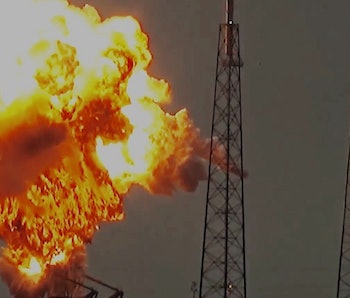 When SpaceX’s Falcon 9 rocket blew up last month, destroying Facebook’s satellite, it sparked a flurry of speculation over what could have caused it. Founder Elon Musk has been working tirelessly to get to the bottom of the mystery, and in the dead of night on Wednesday, he tweeted out a theory that could (read: probably won’t) blow the whole case wide open.

Claire McNear, a staff writer for The Ringer, has published a story naming several potential culprits that may have wanted to see Musk’s handiwork go up in flames. Of course, both McNear and Musk acknowledge that the people mentioned are innocent, but hey, when you’re attempting to unravel one of the greatest space conundrums of our time, sometimes it pays to blow off a little steam once in a while.

For example, perhaps aliens did it?

Another suspect that McNeal puts forward is Mark Zuckerberg. The Facebook CEO saw one of his most ambitious projects to date go up in flames, with the satellite aimed at bringing internet to sub-Saharan Africa obliterated at the launch site. It doesn’t make much sense, but possibly makes more sense than aliens.

“Like, OK, maybe he’s sad that millions of dollars and years of hard work went down the fiery drain — or maybe he never wanted that thing in orbit anyway,” McNeal said. “Maybe he is filled with remorse for turning us all into phone zombies, and is protecting the innocents of the world the only way he can.”

SpaceX has been exploring the disaster site to try and understand what may have caused the event, with Musk describing it as “the most difficult and complex failure we have ever had in 14 years.” Working late into the night, the mystery has been compounded by the fact that there was no apparent heat source at the moment of explosion. McNeal’s theories may be outlandish, but with the complexity of the investigation, it may be the closest thing to an explanation we’ll hear for a while.