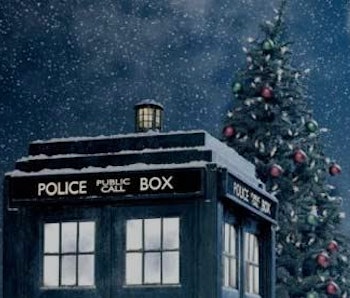 “The Doctor and an American superhero walk into the TARDIS” sounds like the setup for a joke, one that former Time Agent Jack Harkness would certainly appreciate. But it’s actually the plot of this year’s Doctor Who Christmas Special.

According to Radio Times, Matt Lucas’s Nardole (from last year’s special) will be a-companion-who’s-not-really-a-companion, and Justin Chatwin (Shameless, American Gothic) will be playing a “superhero” with an American accent and a “brash” personality.

That’s a lot of unwrapping to do. We combed through our extensive knowledge and came up with the only answer we could from Who episodes past: The closest thing to a “superhero” in Doctor Who is a Time Agent.

Remember that Captain Jack Harkness was a Time Agent when he first met the Doctor all the way back in Season 1 of the Revised Series. The Time Agency was founded after the Time War left a power vacuum due to the (almost) extinction of the Time Lords. The human Agents were charged with keeping time on track.

And if Chatwin really is playing a Time Agent, then we’re totally getting a prickly, American version of Captain Jack Harkness to grump around with Peter Capaldi’s Doctor for Christmas this year!

The Doctor Who Christmas special airs on … you guessed it: December 25.