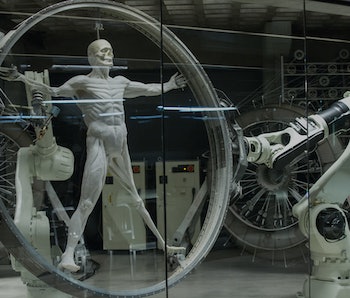 The first episode of Westworld was filled with strange and uncanny events, but the most head-scratching part was that scene where a rogue robot apparently goes off the rails on a milk filled-murder spree.

He shoots his fellow robots whilst chugging milk, pours milk on their wounds, and then chugs some more of the stuff, leading to milk almost immediately leaking from his own wounds. The most twisted part of it all is just how gleeful he seems. When the park employees come to investigate and remove him from the scene, one of them aptly calls it a “shit storm.” It’s certainly quite something, and it stands out enough that it will surely have plot significance down the line. Let’s take a deep dive into what the fuck was up with that milk.

“The Original” was jam-packed with Shakespeare references, from Romeo and Juliet to King Lear. But, some of its literary allusions were visual rather than auditory. The milk could be a visual nod to Macbeth: either the “unsex me” soliloquy, in which Lady Macbeth says “take my milk for gall,” or an ironic nod to the phrase “the milk of human kindness,” which appears earlier in the play. On another show it might sound like a stretch, but it would certainly fit Westworld’s Shakespeare-heavy allusions.

Linking science and magic is a tradition that extends far back both in the sci-fi and fantasy genres (think using genetics to explain X-Men, the way seasons work in Game of Thrones, or whatever the fuck was happening in the movie The Fountain). It also happened historically, in the field of alchemy, which is a little something you might recognize from Harry Potter and the Sorcerer’s Stone. Westworld is peddling in science, sure, but the way the robots take on their own personalities — and that weird milky substance they are formed in — is borderline magical.

The creepy robot repeats the phrase “growing boy” over and over, as he force-feeds milk to his murder victim. This is admittedly a stretch, but it could be a heavy-handed nod to the robot’s growing sense of consciousness and retention of their memories. After all, some of Westworld’s nods were a tad heavy-handed.

Heterosexual human men are sexually drawn to the female body parts that link to life and their own origins. Robot gratification could be the same. Instead of being born from a woman, we see the robots being formed in a milky-looking substance in the lab. The robot does seem pretty hyped up about milk, after all.

Ed Harris’s Man in Black is trying to find the limits of the seemingly endless landscape of the park. In the pilot, we saw a disturbing scene in which he scalps a robot, somehow knowing that his scalped skin would show a map. The show seems to be hinting at something greater beyond the concept of “rich people pay a lot of money to rape and murder robots.” Perhaps the bizarre milk incident is another “hint,” then.

Or maybe the writers just really, really like milk.

Westworld is airing on HBO on Sunday nights.