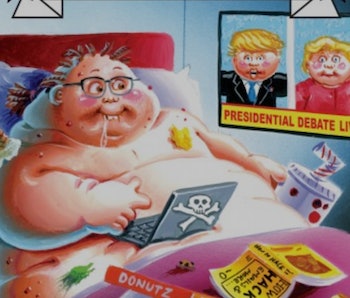 One of the weirdest moments of the first presidential debate was Donald Trump’s guess that, maybe, the Democratic National Committee was hacked by “somebody who could be sitting on their bed that weighs 400 pounds.” It was classic Trump™ smart-assery, arguably his most powerful weapon.

When he trotted out the antiquated view of hackers, it only helped illustrate how far behind his views on cyber warfare are compared to those of Hillary Clinton. It also conjured up one hell of a visual, one that was too enticing for the wonderfully demented minds behind the Garbage Pail Kids to resist. The trading card series that was a hit in the 1980s seems to have struck a nerve again: The “Disg-Race to the White House” series has sold out. Here’s that disgusting “400 lb. Hack Earl” card:

Aside from the scathing and bulbous depictions of the Republican, Libertarian, and Democratic presidential candidates, the “Disg-Race to the Whitehouse” set also features “Hack Earl,” an ingenious interpretation of a “400-pound hacker”, a visualization of what was probably in Trump’s head when he made that comment in front of some 80.6 million people.

Starting on Monday, September 26, the cards were sold individually every 24 hours, each with a sale date printed on the back. Within the first day, Card #1, featuring Hillary Clinton and Donald Trump in Godzilla-themed warfare, sold 1,196 copies, marking the most successful exclusive online card sale of all time. Although it’s too late now, the cards went for $9.99 each, five for $29.99, 10 for $49, and 20 for $79.99. However, there’s now plenty to go around on eBay.

Illustrator Brett Engstrom also included Alicia Machado, the 1996 Miss Universe who Trump called “Miss Piggy” and an “eating machine,” Trump wiping sweat off his face with a hamburger, Clinton as a scary clown, and Gary Johnson blanking out on the “meaning” of Aleppo.

This is the second time this year that Topps has released a presidential-themed set of cards. Back during the primaries, Topps issued their “Apple Pie in Your Face” set a series of delightfully savage renderings of Ted and Heidi Cruz, Kid Rock, John Kasich, Hillary Clinton as a colorful parrot, Trump with baby hands, and Bernie Sanders playing a banjo.

Launched in 1985 in attempt to piggyback on the success of the Cabbage Patch Kid toys and games, the Garbage Pail Kids are not exactly kids but twisted versions of people engaged in dark and obscure behavior. They were originally illustrated by the Pulitzer-winning cartoonist Art Spiegelman. The first series features characters such Iv Ivy, an IV bag in the shape of a person that is guzzling blood from a hairy arm; Dawn Pour, a person standing in the rain whose face has been replaced by an umbrella; and Adam Bomb, a kid with a nuclear explosion bursting out of his head.

Garbage Pail Kids trading cards were like the pogs or Beanie Babies of the mid-1980s. They were insanely popular amongst elementary school-aged children and were constantly selling out at stationary and comic book stores. During the height of their popularity, they were frequently banned at schools for being inappropriate and distracting. There was even a Garbage Pail Kids Movie that featured adult dwarfs playing the trading card characters wearing enormous, expressionless masks.

Funnily enough, those kids who were into Garbage Pail Kids during the 1980s are still fans today. Except they’re adults now, and they’re keeping the brand going strong. Long live the “Disg-Race to the White House” cards!

More like this
Culture
Feb. 4, 2023
The End of the Cold War Could Have Killed James Bond. Instead, it Made Him Stronger.
By David Grossman
Culture
6 hours ago
One of the First Movies Made During the 2010s’ Zombie Renaissance Was Also One of the Best
By Jon O'Brien
Culture
Feb. 5, 2023
Peter Jackson’s Most Unnecessary Movie Fixed the Biggest Problem with The Hobbit
By Ryan Britt
LEARN SOMETHING NEW EVERY DAY.
Share: