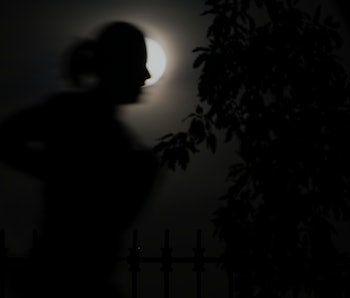 If harvest moons aren’t your thing and blood moons are still a bit too macabre, fear not because tonight at 8:11 p.m. a “black moon” will occur in the Western Hemisphere. So what is a black moon?

A black moon is the second occurrence of a new moon in a single calendar month. It happens approximately every 32 months and tonight, it will rise above the Western Hemisphere — but it won’t be visible from earth.

“You won’t see it — there’s really nothing to see — and there’s nothing supernatural about it,” NASA writes in a blog post.

The Eastern Hemisphere will also experience the same moon, but not until October 1. This means their black moon won’t actually occur until the second new moon of October, on the 30.

The biggest bummer? Unlike the blood moon, there are no apocalyptic prophecies associated with the black moon, so if you wanted to use the end of the world as an excuse for excessive partying tonight you’re out of luck.

Much like astronomers, witches also aren’t on the same page about what exactly the black moon means. Some believe the astrological event can make spells more powerful than normal while others think the moon makes any rituals or spells ineffective. If you’re not interested in casting spells, many Wiccans say the black moon can be a good time to start over and rid yourself of bad habits (a second new moon means twice as many chances this month). Who needs a juice detox when you have moon energy?

More like this
Science
Jan. 22, 2023
Supermassive black holes may be bigger and more powerful than we previously knew
By Jeff Nagle
Science
Feb. 3, 2023
Snow Moon 2023: You Need to See February's Bright Full Moon This Weekend
By Jeff Nagle
Science
Feb. 3, 2023
Look: Astronomers Find a Potentially Habitable Exoplanet With a Violent Past
By Kiona Smith
LEARN SOMETHING NEW EVERY DAY.
Related Tags
Share: