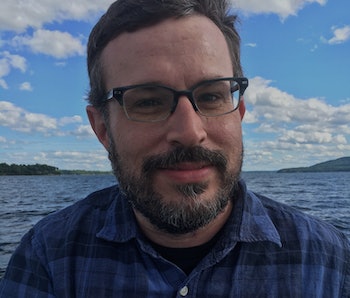 This week, we spoke with Michael J. Martinez, author of the Daedalus series, which involves Mars and pirates in space. Martinez spoke to Inverse about getting inspiration from Treasure Planet, why sci-fi is so exciting right now, and more.

What came first to you in your world-building for this series, the setting or the characters?

The world. The notion of putting a sailing ship in space. This goes back to 2002, when I was having a very successful bout of unemployment. I was walking by a Blockbusters and I saw an ad for Treasure Planet, and I’m like, “Oh my God, what a great idea.” It had this kid and he was hanging off the rigging and he was obviously in space because there was a star and galaxies and planets. I thought, “That’s cool. That’s what I want to see.” So I rented it and was very disappointed.

I’ve actually gotten a bit of flack online, like, “How dare you say that about such a Disney classic!” I’m glad you liked it. I didn’t. Around about that time, I started seeing trailers for Master and Commander. So I saw that and put the two together: What if you took the notion of sailing ships in space and you played it as straight as possible, and you had this Napoleonic era setting, but in the solar system?

Did you have to do much outside research or reading to back it up?

I did a ton of research into the era, into how sailing ships of the period actually worked. In San Diego, I got to walk the deck of the ship they used in the Master and Commander movie. That was really good because you’re like, “Okay, this is much smaller than I thought.” There’s far less space to move around, and when you’re doing — for want of a better word — the blocking in your scene, you’re like, “Okay, these guys are going to be on top of each other, you can’t have six people in this room, it can only fit two.”

It was the same for the futurist part of those books where I’m like, “What is the current thinking as to how you would create a colony on Mars? What would you create a colony for? How would it be built? Who would be there and why?” If you’re going to take either a cast setting and make it fantastical, or create a science-fictional setting, you really have to do the research.

And because sci-fi as a genre has had such a boom lately, are there any movies or TV shows you’ve enjoyed recently?

You hit the Marvel stuff and they do high-quality superhero entertainment across the board; I don’t think they’ve put a stinker out yet. But at the same time, you look at some of Captain America: Civil War or Avengers: Age of Ultron and there’s some really thoughtful things going on there. It’s not necessarily a meditation on the perils of war and the necessity of oversight, but it’s there and they are surprisingly intelligent. In the past, they didn’t need to be — you just had Batman and the Joker and they slugged it out.

Interstellar is another great example of a film that uses really good science for the most part. I mean, you can talk about how they represented quantum physics toward the end, but it’s a smart story. We’re in this absolute renaissance of great science fiction, and the stuff coming out is mind-blowing. It’s really good to see. I’m hopeful that we get a little more representation going forward for people of color, different gender identities and sexual identities, etc. I think that would be great, but at least we’re getting smarter stuff and it’s not a bunch of white guys with laser guns.