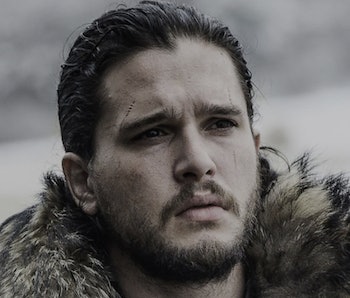 When Jon Snow inevitably figures out his true identity, it’s going to blow his mind. And we’re not just talking about the R+L=J stuff here — it turns out Jon Snow is just one branch of a completely batshit complicated family tree that stretches all the way back to an infamous member of the Targaryen line.

With the release of George R.R. Martin’s A Game of Thrones: Enhanced Edition — the illustrious author’s special collaboration with Apple — we’ve been treated to a new world of house sigils and family trees. Amongst the 92 house sigils and a scrollable map of the entire known world is a list of the entire Targaryen family line. The list starts with Aegon Targaryen’s rule after his landing in Westeros and ends with Aerys II, the Mad King, father to Rhaegar, Viserys, and, of course, Daenerys Targaryen.

Alongside the other Aegons (there are five of them) and Daerons is a name that’s become rather infamous amongst Game of Thrones fans: Jaehaerys.

This makes Jon Jaehaerys Targaryen, Third of His Name, Former Commander of the Night’s Watch, King in the North, Son of Prince Rhaegar Targaryen, and nephew to Daenerys Targaryen. In other words: Poor Jon’s life is very complicated, and will only get more so as time goes on.

A Game of Thrones: Enhanced Edition is the first official George R.R. Martin-created project to be released since the official announcement of Jon’s true lineage took the world by storm. Seeing that Jon shares a name with two of his Targaryen ancestors is big.

Keep in mind, too, that neither Jaehaerys Targaryen in the past went mad, which is rather common amongst incestuous bloodlines, chief being the Targaryen dynasty. So we have high hopes for Jon’s journey from here on out, unlike his aunt.

A Game of Thrones: Enhanced Edition is available for purchase on Apple iBooks.