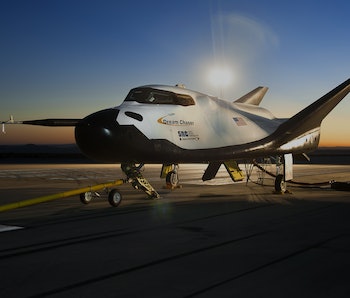 Spaceflight company Sierra Nevada Corporation will launch a United Nations mission to space in 2021. Both parties announced the joint endeavor Tuesday at the International Aeronautical Congress in Guadalajara, Mexico. The mission will fly aboard SNC’s Dream Chaser vehicle, which is currently undergoing a new round of testing in preparation for resupply missions to the International Space Station in 2019.

The mission will consist of a two-week, uncrewed flight to low-Earth orbit, and carry a payload comprising of different microgravity experiments primarily from developing nations. This could include everything from climate change studies, to material sciences, to food security, and much more.

“One of UNOOSA’s core responsibilities is to promote international cooperation in the peaceful use of outer space,” UNOOSA Director Simonetta Di Pippo said in a news release. “I am proud to say that one of the ways UNOOSA will achieve this, in cooperation with our partner SNC, is by dedicating an entire microgravity mission to United Nations Member States, many of which do not have the infrastructure or financial backing to have a standalone space program.”

Countries whose payloads are chosen will have to still chip in a pro-rated portion of the mission costs, depending on their resources. Still, other sponsors are being looked at to finance bigger parts of the mission.

In the next year, SNC and the UN will provide more details for the mission, which is geared towards giving poorer countries an opportunity to participate in spaceflight like never before.

In addition, the mission is a boon to SNC, whose 30-foot long Dream Chaser spacecraft — which looks an awful lot like the old NASA Space Shuttle — has not seen nearly as much action as other companies’ vehicles, like SpaceX’s Dragon.

More like this
Science
Oct. 1, 2022
NASA Crew-5 launch: Timeline, how to watch this historic ISS mission
By Harry Stoltz
Science
Sep. 25, 2022
We’ve dumped over 15,000 pounds of trash on Mars
By Cagri Kilic and The Conversation
Science
Sep. 24, 2022
One NASA asset will be critical to Moon and asteroid missions' success
By Doris Elín Urrutia
Related Tags
Share: