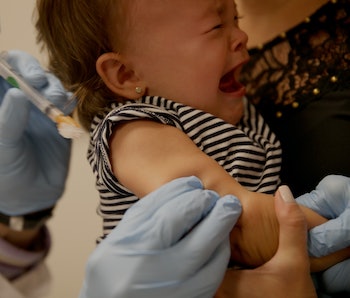 Humans living from the Great White North to the Southern tip of Cape Horn can rest assured that their lands are measles-free. For now.

On Wednesday, the World Health Organization, together with the Pan American Health Organization, proudly announced that the devastating disease had been eradicated in the Americas, after over two decades of rigorous vaccination. Does this mean we can let down our guard? Well, no — the eradication of measles is all the more reason to keep our defenses up.

I would like to emphasize that our work on this front is not yet done. We can not become complacent with this achievement but must rather protect it carefully. Measles still circulates widely in other parts of the world, and so we must be prepared to respond to imported cases. It is critical that we continue to maintain high vaccination coverage rates, and it is crucial that any suspected measles cases be immediately reported to the authorities for rapid follow-up.

By “eradicated,” the WHO means that there are no cases of measles originating in the region. It doesn’t include the cases involving carriers from the outside: In the time period roughly spanning January to September of this year, 54 people from 16 states were reported to have measles. The majority of people who got measles, the CDC notes, were unvaccinated, and the disease is most likely to spread when it reaches communities with large groups of unvaccinated individuals, perhaps via carriers from overseas.

Measles, though eradicated in the Americas, still affected some 240,000 people worldwide last year, most of whom live in Asia and Africa. That number represents a decline from previous years, illustrating a downward trend that is good news for everyone, but it drives home the point that the disease is still very much alive and circulating in areas where vaccination hasn’t been as rigorous.

Etienne’s advice boils down to this: Until the disease is eradicated throughout the planet, vaccination — our only protection from foreign carriers, and the only reason eradication is possible in the first place — is absolutely essential. Anti-vaxxers, we’re looking at you.

When the eradication of measles is achieved on a global scale, then we can move into the containment phase. In the past half-century, four other vaccine-preventable diseases have been classified as “eradicated” in the Americas: smallpox, poliomyelitis, rubella, and congenital measles syndrome, which was added to the list last year.

As far as we know, the only remaining samples of these viruses are kept in government laboratories — they’re necessary for creating vaccines, if for whatever reason the viruses ever resurface — and are protected under extremely tight security, a precaution against the samples getting into the hands of bioterrorists. As the CDC notes, ominously, in its notes on smallpox: “[Credible] concern exists that the virus was made into a weapon by some countries and that terrorists may have obtained it.” We can bet that security around measles samples in the Americas will be tight once it’s been eradicated worldwide, but until then our resources will be better spent ensuring we don’t allow it to return.

More like this
Science
Sep. 20, 2022
Extreme heat linked to harassment at work, study reveals
By Tara Yarlagadda
Mind and Body
5 hours ago
Why just one case of polio is cause for alarm — a virologist explains the dreaded disease
By Rosemary Rochford and The Conversation
Science
14 hours ago
Why do cats love cardboard boxes? Pet experts decode the obsession
By Tara Yarlagadda
Related Tags
Share: