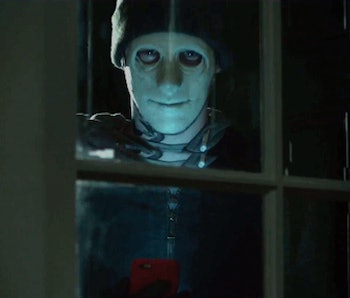 There’s a horror movie out there for everyone on Netflix, and October’s arguably the scariest month after April (bunnies). These 13 scary AF movies on Netflix will make you think differently about religion, dogs, teens, and home invaders.

Whether you’re into nail-biting suspense or the traditional exorcism, it’s on Netflix in October. You’ll find your fair share of films starring a cute nuclear family who moves into an old house to get a “fresh start.” We all know the story: The family golden retriever will start barking at a wall, and it’s all downhill from there. But there’s so much more to be seen, and we want to help you get your horror film fix when that Halloween party your roommate from college’s brother hosts sucks more than a Twilight vampire.

No, none of these are in The Human Centipede trilogy (which is actually available to stream in its entirety on Netflix, ironically enough). But below, you’ll find a list of some of the scariest, weirdest horror films on Netflix in no particular order. Some are classics that you’ll thank us for reminding you exist, while others are here to inspire fresh fear. If you’d rather not be terrified, here’s everything new on Netflix in October.

Starting the countdown is V/H/S, a horror anthology film about a group of “outsiders” hired to steal a rare VHS tape. It’s what’s on the VHS that’ll scare the ish out of you.

You know it’s necessary: a found footage pick. Creep is the story of a filmmaker who’s hired to take video of a backwoods-dwelling man before he dies of terminal cancer. The subject becomes obsessed with the filmmaker, dons a cartoonish wolf mask, and won’t let him leave.

From the same producers who brought you Paranormal Activity and Insidious comes our pick for the plagued-family trope. If you want a film that includes mysterious wounds and bruises, possession, jump-scares, and an “expert” in the paranormal to boot, this is the one for you.

Horror can’t really be discussed without Stephen King. This novel-turned-cult-classic plays on our primal fears of control and pits man’s best friend against man.

Starry Eyes is body horror to the max. If you can’t stand blood, rotting fingernails, and satanic cults then stay far away from this one. Sarah is an aspiring actress in Hollywood looking for her big break. She gets it.

Say it with us: “horror documentary.” If you’ve ever experienced sleep paralysis, you’ll know what a weird experience it can be. But, sometimes, it verges on the truly terrifying, and this documentary set out to capture that.

A delinquent is sentenced to house arrest in her childhood home while her batty mother looks on. An even mixture of dark comedy and paranormal horror, you’ll probably be just as convinced as the main character is that your house is haunted after watching.

Falling under the “home invasion” category is Hush, the story of a woman who is both deaf and mute and whose home in the woods is suddenly plagued by a masked intruder. She uses her otherwise enhanced senses to try and escape his clutches.

This Australian film got a lot of traction in 2014 from both critics and audiences alike. It’s weird and wonderful, and falls under the indie-horror genre. A demonic creature fittingly called the Babadook enters a home through the pages of a children’s book and plagues a widowed mother and her young son. The child in the film is annoying as hell, but it’s all part of the fun.

Starring as our suspenseful WTF-movie is The Guest. A war vet visits the family of a fallen comrade, having promised he’d look after them. He’s charming and handsome. Things get weird and violent from there.

Take a ride with Satan in a Philly elevator. Seriously. Five strangers get stuck in an elevator in an everyday office building in Philadelphia. What starts out initially as an annoyance turns into a terrifying experience as they realize one of them is literally Lucifer. But which one?

A thriller in every sense of the word, The Pact has murder, gore, ghosts, and mystery. It’s hard to describe without giving the plot away, but just watch it. You’ll thank us.

Of course, we had to include the king of all horror films: The Exorcist.

Loosely based on a true story, sweet little Regan MacNeil starts levitating and speaking in tongues, prompting the local priest to believe she’s been possessed by the devil. An exorcism ensues.

More like this
Entertainment
Sep. 21, 2022
You need to watch DC’s most underrated movie of all time on Netflix ASAP
By Eric Francisco
Entertainment
Sep. 13, 2022
With Pearl, A24 perfects its first horror franchise
By Andy Crump
Culture
Sep. 18, 2022
You need to watch the sexiest sci-fi thriller of all time on Amazon Prime ASAP
By Andy Crump
Related Tags
Share: