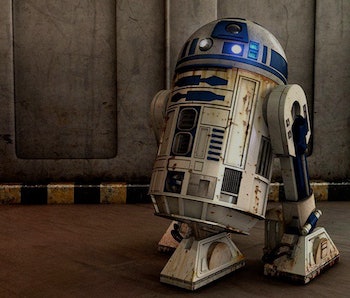 In the moments before Star Wars: A New Hope, the heroic droid R2-D2 was hanging out aboard the starship Tantive IV, but before that, we’re pretty sure the beloved droid is going to make at least a cameo appearance in Rogue One.

A fresh batch of previews featuring new Rogue One-themed Star Wars toys from Hasbro conspicuously includes a “smart, programable R2-D2.” While this appears to be a repackaging of other R2-D2 toys from the past, it does beg the question: Is R2-D2 in Rogue One? Why would Hasbro release an R2-D2 toy if he’s not in the movie? We know Rogue One definitely does feature an evil R2-D2 doppelgänger of sorts — C2-B5 — an Imperial astromech droid working for the bad guys. If Hasbro wanted an R2-D2-esque toy for the Rogue One, they could have repainted the old R2 toys to look like C2-B5, right?

Unless R2-D2 is actually in Rogue One.

When we consider that R2’s original function in Star Wars was to be the character who had the Death Star plans, an appearance from the plucky robot makes a lot of sense. If R2-D2 gets the plans from Princess Leia on the Tantive IV in A New Hope, it’s conceivable that he’s present at some other part of the operation in which the plans are stolen.

A cameo from the young, rebooted Alden Ehrenreich Han Solo is already heavily rumored for Rogue One. If Han can be squeezed into the continuity of the film, it stands to reason R2-D2 could be with him, too. Unless, of course, R2-D2’s scenes in Rogue One give the droid some new character detail that adds a wrinkle to his role within the overall Star Wars mythos.

On multiple occasions, Star Wars creator George Lucas has claimed that the entire story of these films is told through the eyes of R2-D2 and C-3PO. To date, every single in-canon Star Wars film has featured R2. And even if R2-D2 is only on-screen for a second in Rogue One, it would make the film feel more like a Star Wars movie. Here’s hoping his beeps and boops are with us come this December.

More like this
Entertainment
Jan. 13, 2023
Is the artificial intelligence in M3GAN a real threat?
By Andy Crump
Science
Jan. 26, 2023
Can this new artificial skin transform touch screens and video games?
By Joanna Thompson
Innovation
Jan. 25, 2023
Watch: This jail-breaking wireless robot melts and reassembles on command
By Jennifer Walter
LEARN SOMETHING NEW EVERY DAY.
Related Tags
Share: