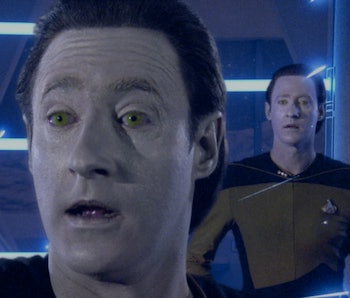 In the famous Star Trek: The Next Generation episode “The Measure of a Man,” Guinan worried about the creation of an “army of Datas,” and now it looks like the beloved android has indeed been duplicated tenfold, though with decidedly less sinister implications.

A forthcoming IDW comic book — previewed on io9 — called Star Trek: Waypoint will depict a future version of the Enterprise-E in which Geordi La Forge is the captain, and the other members of the crew are all…Data. Don’t worry: There is still only one “real” Data; these are simply holographic projections of Mr. Data, spread throughout the Enterprise. In the post-Star Trek Nemesis comic book continuity, Data was reborn in the body of his “sibling” android, B-4. The new story in Waypoint will depict Data having uploaded himself into the computer of the Enterprise, effectively making him the onboard computer. Beyond being just visually hilarious, and totally something Data would do, this is also a nice nod to the holographic characters from the Star Trek: Voyager era. In those stories, the Emergency Medical Hologram from the starship Voyager strives for holograms being granted equal rights, much in the same way Data fought for his own android rights before.

Star Trek: Waypoint is a new anthology comic series which will feature multiple stories from a different era of Trek in each issue. In addition to the future duplicate Data story, this first issue will also contain a standalone story about Uhura set during the original series timeline.