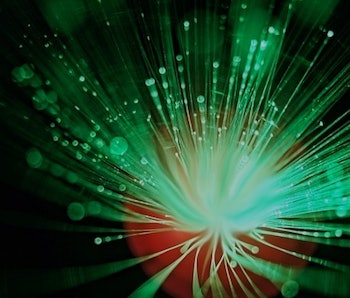 Driverless cars will need to communicate with each other, but anyone who’s ever waited for Netflix to load will know that the internet isn’t always that speedy. Enter Nokia Bell Labs, who along with Deutsche Telekom T-Labs and the Technical University of Munich (TUM) have achieved terabit fiber optic speeds in real world conditions. The breakthrough will be critical for future 5G cellular connections, which cars will rely on to alert other vehicles of danger.

“Future optical networks not only need to support orders of magnitude higher capacity, but also the ability to dynamically adapt to channel conditions and traffic demand,” said Marcus Weldon, president of Nokia Bell Labs, in a statement.

To do this, the team used probabilistic constellation shaping, which uses higher amplitudes less frequently than lower amplitudes. This results in transmissions better suited to their channels, which means really fast internet. So fast, in fact, that the team claims it approaches the theoretical limit of fiber-optic networks proposed by Claude Shannon in 1948.

Probabilistic constellation shaping will help cellular networks roll out 5G. Sure, it’s wireless, but that data has to get to the cell tower somehow before it can beam its way onto your phone. The next-generation connectivity system will depend on fiber optics to connect up the network, with Nokia Bell Labs’ discovery also increasing transmission reach by 30 percent. With proposed speeds of up to 100 gigabits per second, 5G will need all the network infrastructure improvements it can get.

It’s not just speed that makes 5G important to cars, though. The network could help bring much-needed data prioritization. If a kid in the backseat of a self-driving car is streaming Netflix, you probably want the car data to take priority over the film streaming. Ericsson, who has partnered with AT&T on its 5G testing, envisions a future where the cellular network can understand what bits of data need to go first.