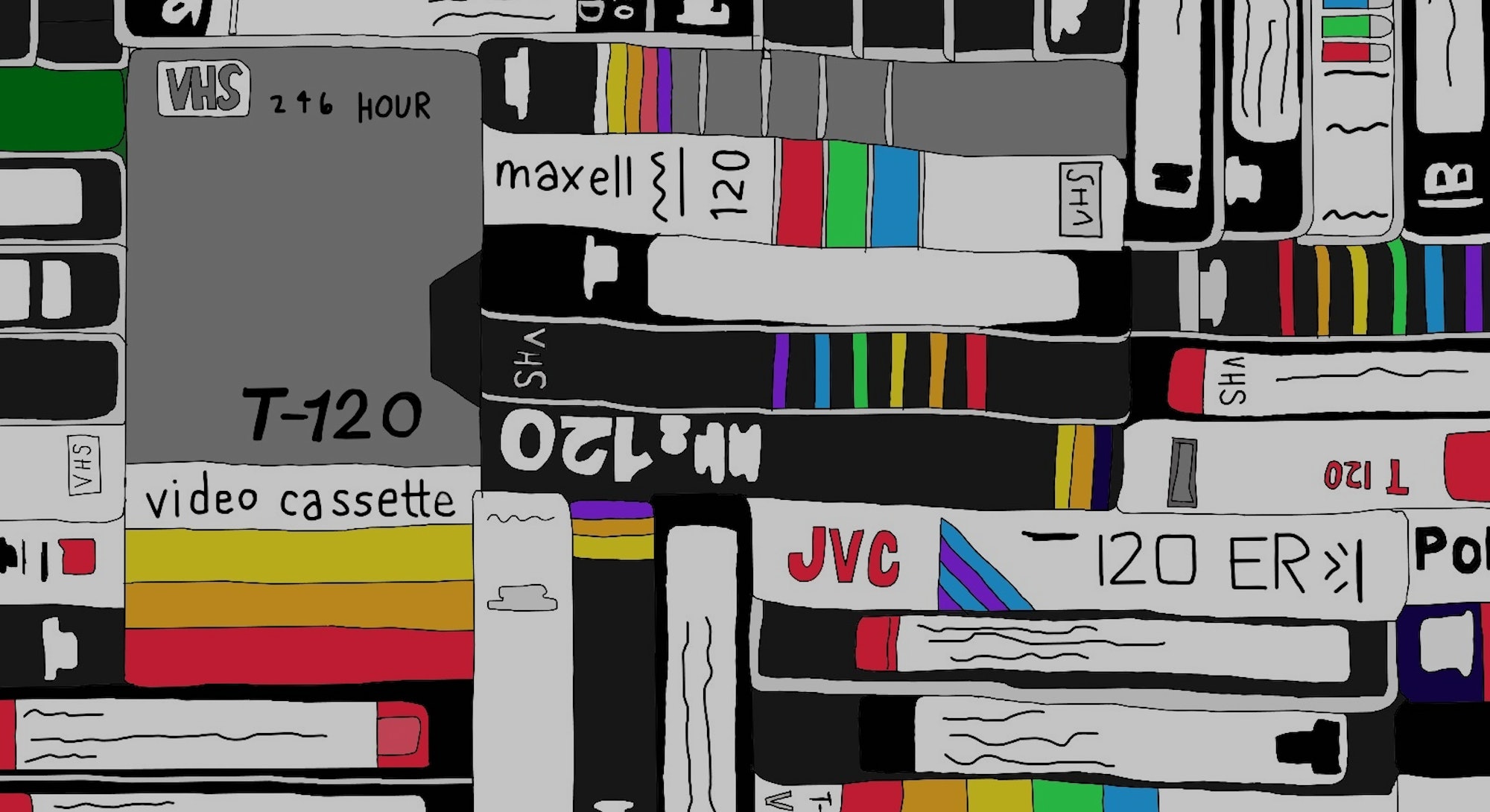 Scattered between the sweaty folds and creases of the internet is a seemingly endless trove of forgotten footage from bygone eras, from B-movies of early Hollywood to half-assed straight-to-VHS productions, old news broadcasts to foreign transmissions. Fortunately, there are a handful of eager (and patient as hell) artists who have made careers of sifting through that footage, mining forgotten ephemera for contemporary internet gold.

Where does it go from there? Depends on the creator — usually, the hours of sifting through footage results in a cut designed for short-form platforms like Vine and Instagram, but longer works are often shared on Facebook or released on iTunes, usually built around a theme chosen by the curator. Like any art form, the level of manipulation this footage varies — sometimes it’s presented as-is, but more often than not a theme or a larger message is presented using the selected footage as the tool for expression.

Inverse sat down with members of the Grimy Ghost!, It Came From the VCR, and Everything is Terrible! teams and the king himself, Vic Berger to talk about the arduous process of curating forgotten or misunderstood footage from the days of VHS all the way up to last week.

Where do you find your source material? Do you decide a topic before collective clips, or do you let clips inform the direction of the video?

Grimy Ghost!: We first found out about found footage through Everything is Terrible. The first tape that got us making our own found footage videos was a Kathy Lee Rockin’ Tots Café Christmas VHS that we discovered in a 99¢ Only store.

It Came From the VCR: I grew up with VHS tapes and absolutely loved going to the video store as a kid. That thrill of looking through insane VHS covers was something I never grew out of.

Vic Berger: Pretty much all of the footage I use comes from places like YouTube or I capture it off of the television. I don’t really do the VHS thing, but I am in awe of what EIT! and Grimy and these other geniuses do with them. It’s a beautiful thing.

Grimy Ghost!: Most of our tapes are found in places like thrift stores and used bookstores. We’ll usually grab any tape that looks bizarre, weird, funny, and bad, but all in a unique way.

For our compilation videos, we usually use what we can find in stores at that time, and sometimes through serendipitous forces, the tapes usually have a connecting theme to them. You get lucky when a Christian youth minister decides to depart with their bundle of kids safety videos and that leads to a fun cheesy compilation video on child abduction.

Everything is Terrible!: Both, but usually we’re just finishing someone else’s work. Sometimes filmmakers have a great idea for a five-minute short film and they end up stretching it into 90 minutes somehow. So we help reel it back in and finish up their editing.

It Came From the VCR: I find all of my stuff at thrift stores. I am more about discovering something new as opposed to looking for popular titles. Anything with a ninja on it will be purchased immediately.

VHS tapes exist in a very specific era, and people seemed initially convinced they could get rich off of them. What the fuck happened?

Grimy Ghost!: VHS tapes were a good way to make money in their heyday because they were a hot commodity. People liked the idea of controlling what they watched. The market became flooded with tapes, so they either became very cheap or were just never bought. Plus, once DVDs came out, VHS tapes were gone from store shelves shortly after.

Everything is Terrible!: As always, technology changed. DVDs were a more accurate image quality, took up less physical space, and cost less to manufacture and distribute. But we’re still convinced that we’ll get rich off em!

It Came From the VCR: There are some real tapes out there that are really hard to get a hold of. There isn’t a single thrift store that doesn’t have a stack of those “rare” Disney tapes laying around everywhere. As a joke, I tried to sell three Little Mermaids on eBay for $9,999.99, but had no takers.

Are there certain genres of video that lived and died in the VHS era?

Grimy Ghost!: No genres died during the VHS era, they just moved onto other formats like DVDs and YouTube. If you look hard enough, you can find garbage media anywhere.

It Came From the VCR: It’s been a while since I have seen Ninja movies show up on Blu ray. If I had a nickel for each Ninja movie I owned, I’d have a shit-load of nickels.

Have you ever heard back from someone whose footage you drudged up? What was the response?

Grimy Ghost!: A man who starred in an instructional balloon animal VHS called “Balloonacy” saw our edit of the tape. He was curious about how we had found the tape, but didn’t mind that it was posted online. Another time, someone claimed that the goofy man in a kids activity tape was his stepdad. In our experience, they’ve all laughed about it.

Everything is Terrible!: Sometimes people are excited, other times they want it taken down. Once a video-maker that we genuinely really enjoy called one of our moms to have his videos taken down. We ended up having him perform at a live show though, so I think we’re good now.

Vic Berger: Being that I use copyrighted material for almost everything I edit and chop up, I sometimes hear from the companies that own the footage. A number of times NBC or Ellen’s show or Steve Harvey’s company have tried to take down my videos. But because I am creating something new out of the material and using it to comment on it through editing, I am allowed to keep the videos up under fair use. But that doesn’t stop these giant corporations from threatening me and trying to bully me into removing the work. By law, they have no power and always will lose.

I think the most interesting person to hear from was the grandson of Rev. Jim Bakker. I did an edit for Everything Is Terrible! of his show where he’s selling these huge buckets of dried food that he wants you to buy so you are able to survive the apocalypse. His grandson who works on the show reached out and said he was a fan. Honestly, that’s the last person I would ever expect to hear from, but it’s cool to know he gets it and can get some laughs out of it. Might be cathartic for him? I hope so.

Why is material from the VHS era so ripe for comedy? Why do you think it appeals to people so widely, especially on the internet?

Grimy Ghost!: VHS tapes were so cheap to make, resulting in a massive amount of hilariously terrible products. Bad ideas were greenlit often because standards weren’t as high as they would be at major movie studios. The look of VHS definitely harkens back to a lot of our childhoods but because these tapes are mostly fairly obscure, the experience of watching them feels strangely familiar while still being new and exciting.

Everything Is Terrible!: Every era is ripe for comedy because humans are ridiculous monsters.

It Came From the VCR: The best part of Instagram and Vine was that you can take a few seconds, post a small slice of it out of context and it takes on a whole new weird life. You can take any religious propaganda, which usually involves puppets, and chop it down to a single soundbite and make it look like a crazy person produced it.

What’s your favorite piece of your own work?

Grimy Ghost!: Our favorite video has to be the one that started it all. Kathie Lee’s Rockin Tots Café [“A Christmas Giff has everything you could ever hope for in a bad video: baffling celebrity career choices, Frank Gifford as the voice of a football bear monster, Kathie Lee Gifford rapping, a shoehorned religious lecture out of nowhere, a jukebox that talks like Elvis – it’s perfect.

Everything is Terrible!: Gotta be this one.

It Came From the VCR: My favorite clip ever, is this clip of a kid learning about operating heavy construction equipment. Even when played in context it looks very suspect.

Vic Berger: It’s hard to choose a favorite. Really would depend on my mood, I suppose. I have been doing lots of political edits and I love doing them, but with Trump in the race, it’s become so horribly negative and I really can’t wait for the election to be over. That’s why I’ve really been loving working with Steve Harvey.

And as far as my political edits, I am proud of my latest edit of Trump on Fallon. It’s more pointed than most things I’ve done, yet it still has it’s goofy moments in it.