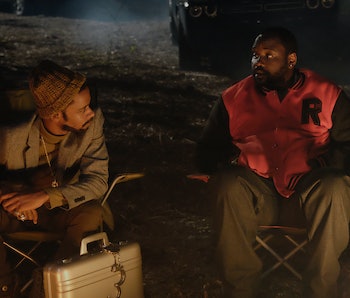 In its third episode, “Go for Broke,” Atlanta masters an impressive ability to expand the show’s world while grounding itself in realistic character motivations. Atlanta’s ensemble cast made their talent clear in the two-part premiere but “Go for Broke” gives the audience a clear idea of how the show will handle its weekly narrative. After the startling events of the premiere, Atlanta settles into a comedic rhythm that never loses tension.

We follow Earn, Albert, and Darius on separate journeys that still manage to make the consequences of failure clear for our protagonists. “Go for Broke” is a great example of Earn’s ability to bridge his more relatable world with the realistic dangers of drugs and gang violence that make up Paper Boi’s experience. The show balances both plots well and never loses energy as it bounces between an equally tense dinner and drug deal.

“Go for Broke” is a great episode because it gives us two plots that play with our expectations and pay off in unexpected ways. Earn’s date with Van should be a thoroughly funny affair as he struggles to maintain his bank balance and her high expectations. Yet for the first time, we see that Earn has a lot to lose when Van outlines how important it is that he succeeds for their daughter. Earn exists in opposition to Paper Boi: Darius and Albert have professions that put them in immediate danger but can afford to take risks; Earn, however, risks jeopardizing his relationship with his daughter if he fails. Albert receives free food and perks following his increased fame after the shooting; Earn can only afford a kid’s meal — and he can’t even successfully order that. “Go for Broke” details Earn’s struggles with low paychecks as even valet fees chip away at the small amount of money he has to prove himself to the mother of his daughter.

This is where Van’s character really excels. Her anger and frustration with Earn is always righteous. She complains about Earn turning her into the “Angry Black Woman” stereotype, but the script is careful to show that her issues with Earn are legitimate. Because Van isn’t a stereotype but rather a fully-realized character, it heightens the consequences of her scenes with Earn. Their date is hilarious, but the tension is real as Earn’s spirit falls with each appetizer and entree ordered. While the scene could be hilariously emasculating, you really just feel empathy over his inability to provide for the woman he clearly loves. When Earn’s card finally goes through and the date is paid for, the viewer feels almost as relieved as Darius and Albert do as they walk away from their drug deal alive. The script and direction never vilifies her for wanting an expensive, nice night out. She’s always in the right, even when she adds a tip to the bill and pushes Earn’s back account over the limit.

We also see another side of Albert as an uneasy drug deal chips away at his confidence. Although he postures that he isn’t afraid of the Mexican drug gang that he’s picking up from, Brian Tyree Henry’s performance betrays Albert’s true nerves. His status as Paper Boi can’t save him from the gang’s suspicions and the very real threat of death. However, the show plays with our expectations again. Instead of taking a serious turn like Van and Earn’s dinner, Albert’s drug deal is played entirely for laughs. After a man is murdered at the top of the scene, the focus shifts to the comedy. This plot makes clear that Albert’s rise to fame won’t be quick or easy, and the show is going to take the time to illustrate the realities and complexities of his life as a drug dealer.

It would’ve been easy for the show to gloss over the violence of Albert’s profession for the sake of comedy, but Stephen Glover’s writing is able to handle both themes tactfully and hilariously. Seeing Albert’s confidence shake after he spends most of the episode bragging and tossing his gun around with ease adds layers to a character who easily shot someone at the show’s start. Despite getting away with that crime, Paper Boi still has people to answer to. The Migos may end this transaction on good terms, but their violent introduction makes it clear that their involvement in Paper Boi’s career could lead to something dangerous.

“Go for Broke” also gives the show a chance to show off its connection to Atlanta’s actual music scene. The Atlanta trio Migos guest as “The Migos,” Alfred’s drug connection. Quavo, Offset, and Takeoff all fit into Atlanta’s world with ease and their presence doesn’t feel like a desperate attempt for the show to prove its connection to real hip-hop. When Paper Boi asks the crew what they’re calling themselves, the camera lingers and hints at their larger importance to the shows narrative. It’ll be interesting to see how they help or hinder Paper Boi’s journey. Migos is a group that has had their fair share of issues with the law and their presence certainly draws parallels with Paper Boi through their real-life struggle to achieve artistic legitimacy while maintaining their street cred. When their 2015 hit “Spray the Champagne” starts booming over the final credits it works as a perfect end point and confirms the authenticity of Atlanta’s aesthetic.

Hiro Murai’s direction works hard to take viewers beyond the city limits of Atlanta as we follow Darius and Albert on a drive to their drug deal in a trippy overhead shot. The dark, curvy highway is only illuminated by the two cars following its path. Shabazz Palaces’ “An Echo From The Hosts That Profess Infinitum” provides an eerie soundtrack that makes the transition from Darius and Albert’s light-hearted singing to a man being hunted easier to digest. “Go for Broke” continues to expand Atlanta’s world while leaving the narrative open for unexpected developments.