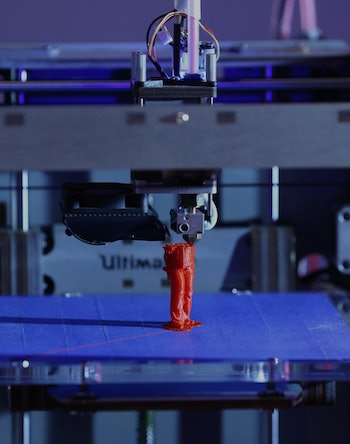 When a piece of sophisticated technology breaks down in Kinshasa, the largest city in the Democratic Republic of the Congo, finding a replacement part can be difficult. And for the doctors and nurses throughout the sprawling city, which contains large swaths of rural area, that can mean the difference between life and death.

Jean Pletinckx, the MSF director of logistics, was there last month when Doctors Without Borders – known internationally as MSF – began a vaccination drive following an outbreak of yellow fever in the area. He went to one of the laboratories where MSF doctors test blood and other biomedical material, only to find things weren’t running as smoothly as he hoped: three of the machines were broken.

Though the machines are complicated, the broken parts are maddeningly basic.

“The spare part that’s missing is a very simple,” Pletinckx tells Inverse. “One is a plastic spare part, and the second is just a piece of rubber, and the third is an electronic part. And if I have a 3D printer I would just print it on the spot.”

The goal was to vaccinate 10.5 million people in ten days, so even the slightest hiccup could slow the effort significantly. Replacing the plastic and rubber pieces with a 3D printer would have been fairly straightforward, but instead, Plentinckx said he had to order the parts from Japan and wait a week or more for them to arrive.

“If we have a 3D printer, I can print these pieces as a temporary solution, which are low-quality but [allow us] to run the machine, and then put in an order to get the original spare parts”, he said. “That means, in this case, I will not stop the entire laboratory because of a single, small plastic spare part is broken.”

What Plentinckx is talking about is called sustainment, and although sustainability isn’t as attention-grabbing as 3D printed guns, it is one of the many promising areas of this emerging manufacturing technology.

With 3D printing, hard-to-find parts that might take weeks to arrive if delivered could become readily available. Just ask Richard Martukanitz. He heads up the Center for Innovative Materials Processing through Direct Digital Deposition at Pennsylvania State University. It’s a leading research facility for 3D printing.

“The area of sustainment is a whole area of interest and activity, that’s really being spearheaded by the Department of Defense, frankly, because they have so many aging military platforms that they can’t find parts for,” Martukanitz tells Inverse.

Still, for groups like Doctors Without Borders that have far-flung operations, there are several steps in between having a broken component and printing a new one. “The real problem now is that you want to have the digital description of that part,” Martukanitz said. “It’s one thing to say I need a simple plastic part, but if you don’t have the design or description of that part, you have to take that part and it has to be somehow scanned.” That’s certainly possible to do now, but not realistic for a doctor in a rural part of the Congo. He said that in the future it’s possible a user would be able to pay to download a design from the manufacturer to then print the new part themselves, thereby cutting down on lengthy supply chains.

But what if the printed part didn’t have to be only a temporary replacement? Regulators, and to a certain extent the public at large, remain skeptical about the quality of 3D printed components. One organization working to change that is DARPA, the part of the U.S. military involved in developing futuristic technology. The DARPA Open Manufacturing Program, which launched in 2012, aims to create confidence in 3D printed materials – the technical term is “additive manufacturing” — by creating a process to certify the quality of the created component, thereby hoping to spur investment in the technology. The tests that DARPA is creating are intended to work across industries, materials, and applications. That is, the Open Manufacturing Program isn’t making a particular set of components, they’re devising a system for analyzing finished parts.

As it stands now, the amount of variables that go into the manufacturing process means that the composition of the final product – whether that’s a leg brace or the wing of a plane — can vary significantly from one printing to the next.

“With 3D printing and additive manufacturing you’re making the material at the same time that you’re making the component,” Mick Maher, program manager at the Defense Sciences Office at DARPA, tells Inverse. “And you’re doing it layer by layer, and that makes it a little bit different than traditional manufacturing, because within that part, you’re getting different thermal histories – it’s just a different history – so the material is not the same throughout the entire component, and that’s what makes these [analytical] tools so important.”

“At the end of the day, people want to make sure the part they thought they designed is what they built,” Maher says. “Whether that’s titanium hip stems or aircraft ribs or blades were putting into turbine engines. We really want what was designed to be reflected in the build itself.”

The potential for 3D printing to revolutionize healthcare in remote parts of the world extends far beyond sustainment, however. What if the hospital in Kinshasa could also print dental implants, or individualized prosthetics on the spot? Those capabilities are already possible with existing technology, and some companies have already experimented with providing care to victims of natural disasters, in Haiti for instance.

“Healthcare is one of the most aggressive industries pursuing additive manufacturing,” Martunkanitz told Inverse.

One reason is that 3D printing allows for incredible precision and detail. Martukanitz, who receives funding from DARPA, gives the example of “implants for, say, hip replacements — certain portions of the parts being built today by additive manufacturing employ a very fine lattice structure at the outer periphery of the component, and that fine lattice structure allows now infiltration of tissue growth and bone growth into the component itself, so it leads to greater strength and adherence of the implant to the bone itself.”

Martukanitz adds that the research his team and DARPA are working on to ensure high-quality production could ultimately impact healthcare providers in hard-to-reach areas of the globe. “A good example is the doctor in a forward theater or some area where he’s needed, maybe a third-world country, and he needs a dental-type implant for a very complex facial operation he performed,” and that doctor needs to know that the implant his 3D printer just manufactured is of high quality. Now, he can’t qualify the process. He’s not going to qualify that part. What he wants is a reliable process and a reliable technique that allows him to produce that part with some assurance that it’s going to meet the performance that he needs.”

There will always be shortages and stoppages in remote hospitals in poor countries, but cutting down supply lines and wait times — from a small spare part to a complicated implant — through the use of 3D printing could have profound effects on global health. That should grab all of our attention.