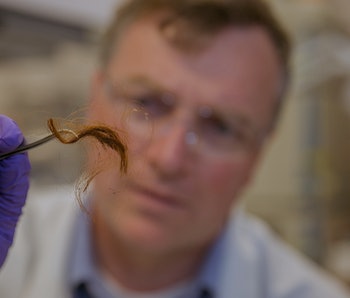 It’s easy to think of DNA testing as an infallible means of identification, but such tests aren’t perfect. They’re just a whole lot more reliable and robust than fingerprints, which in turn are so much better than, say, polygraph tests (which are basically total crap). But don’t confuse the best available science with the best possible science, as a new technique developed by researchers at Lawrence Livermore National Laboratory might have what it takes to make DNA obsolete.

The team’s method is able to identify unique protein markers taken from samples of human hair. Already, the researchers have been able to identify protein markers on skeletal remains as much as 250 years old. That suggests such markers last for much longer than DNA normally does, as DNA molecules can become useless for identification purposes after exposure to light, heat, or other environmental conditions.

The method is still in its infancy. Right now, it takes a few days and multiple hair samples to identify a particular individual from a population of one million people — impressive, but that would still mean someone could be confused with about 7,000 other people if we’re considering the entire world’s population. But these are differences of degree, not of kind, as the hard part was just getting to this point in the first place. Now the researchers say it should be possible to make the refinements necessary to make this a standard technique in crime labs, with it someday being possible to identify a particular individual in all the world from a single hair sample. Other types of tissue like skin cells and bone might also someday be tested in the same way.

The trick to accomplishing all that will be establishing a set of about 100 protein markers whose variations can be reliably used for identification purposes. In a sense, this new kind of testing is an extension of DNA testing: After all, DNA provides the molecular instruction manual the body uses to create proteins. Since everyone’s DNA is unique, their particular set of protein markers will be as well, and the fact that proteins are much bigger than DNA molecules means they don’t degrade as readily in bad conditions.

So will protein testing replace DNA as crime lab’s preferred method of identification? Certainly, the preliminary results from Lawrence Livermore suggest this could be a more robust measurement method than DNA, but that alone doesn’t tell the whole story. We’ve still got to find out whether the researchers can indeed refine the test so that it’s able to pick out a single person in the entire human population, and — more importantly — if it’s able to do so in a way that isn’t massively more costly or time-consuming than testing DNA.

The likely near-term future is for protein testing to someday serve as a complement to the old warhorse that is DNA testing, but in the long run? This might be the test that one day makes DNA testing seem downright quaint. To learn more, check out this video from the Lawrence Livermore team on their research.