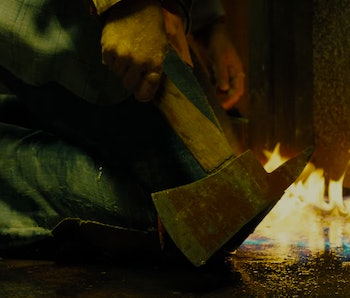 Fire-retardant gel (or fire gel — but don’t confuse it with gel fuel, like Sterno) is a hydrogel made up of polymers that are capable of absorbing hundreds of times their weight in water. When this fire gel is applied to a surface, these stacked polymers form a barrier against flames, which have to burn through the layers of polymer and stored water in order to reach the surface that’s being protected.

It’s not indefinite, fireproof protection, but it does protect surfaces like the skin, clothes, and hair of actors temporarily — usually for a few seconds.

Fire gel isn’t just used for stunts in action films, though. It’s also a big part of firefighting and is used to protect certain areas and structures from encroaching flames. Though fire gel is used for very, very limited on-body exposure in fire stunts, firefighters use it on a daily basis to protect areas against spreading flames. Every few hours, it needs to be doused with more water for the polymer “bubblets” to absorb, which renews their ability to stave off flames.

The crazy absorption abilities and unique properties of hydrogels make them a natural fit for a range of applications, which is why they also show up in diapers and sanitary pads as well as wound dressings and even snow.

Still, fire stunts, though relatively commonplace in today’s action films, are not for the faint of heart. No matter how many fire-retardant layers you pile onto a body, and no matter how many safety measures are in place, lighting a person on fire is always, always dangerous. When highly trained professionals do fire stunts for films, they also use fire blankets, layers and layers of fire-resistant clothing, and follow a laundry list of safety procedures. It’s serious stuff, even if it’s meant to make the audience laugh.