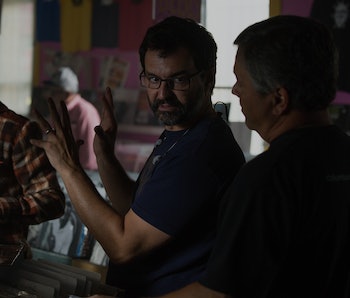 Greg Yaitanes is an Emmy-winning director best known for House, M.D., Lost, Prison Break, Heroes, Grey’s Anatomy, and Banshee. For most, that roster would be enough to call your career a success. But the director also known for his business acumen and technological foresight: Yaitanes was an angel investor in Twitter and also invested in Snapchat and Pinterest.

His latest television endeavor is Cinemax’s ‘70’s-era crime drama Quarry, which premieres on September 9 and depicts a Vietnam veteran’s uneasy arrival back home. Yaitanes spoke to Inverse about his career, the hardest part about getting the Vietnam War right, and why Blade Runner was an inspiration.

What attracted you to this project?

I was in the midst of Season 3 of Banshee when Cinemax approached me about Quarry. What I grabbed onto was the writing. I saw a beautiful craft at work and I could understand [protagonist Mac, played by Logan Marshall-Green’s] character. I could understand trying to make peace with something in your past and trying to overcome that, all the while being constantly reminded of it. Those themes spoke to me.

It’s got an interesting mix of a ‘70s aesthetic and noir undertones. How did you go about creating the style?

The words I got from Michael Lombardo were, “I want a more entertaining version of Mud.” And I knew what that meant; Jeff Nichols’ work is so specific with a sense of place. You have a sense of the culture of where it takes place.

I did a big sci-fi adaptation called Children of Dune which was James McAvoy’s first gig and then I did a Roman Gladiator thing, which was Emily Blunt’s first gig. Sci-fi/fantasy is also in the same family as period, it’s just period of another kind. Whichever direction I’m going, I’ll hold a movie like Blade Runner up as a model. It was a form of a period film and the main characters are not impressed with their surroundings. Harrison Ford isn’t impressed that cars fly, because cars fly. For Quarry, I didn’t dwell on details like record players and rotary phones — Mac isn’t impressed with the physical objects of the time. So we were very careful not to get “drunk” on the 70s. A lot of filmmakers better than me have fallen into that trap. We were very vigilant to not let the period come to the foreground, and in doing so studied a lot of films until 1972 to get their texture and try to recreate it — so this feels of something made in that period with a slightly modern eye attached.

What were some of the films you were looking at?

On the ‘70s side, Deer Hunter, Coming Home, The Friends of Eddie Coyle, French Connection, Death Wish. Present day, Blue Valentine, Drive, The Place Beyond the Pines. And also in there, I’m somebody that loves the long take and there’s a lot of opportunities of single, unbroken shots throughout the season that I’m particularly pleased with. Stylistically, I wanted to work out from the acting and the writing. I was trying to find a place for the camera where it was the least intrusive and the minimal amount of cuts and coverage — all the while still being at the pulse of genre story.

What was the most challenging aspect?

Getting Vietnam right. I went to go look for modern records of Vietnam. I was unable to find any because nobody has touched Vietnam that was not either living through it or there in it. Like Oliver Stone, Frances Coppola — all lived that war and it meant something to them. I was very concerned we would just look like we were playing dress-up if we didn’t get it right. We knew we were on to something because we actually had a challenge getting veterans to participate. Not because of the subject matter, but because it was hitting too close to home for them. My hope is that for people that went — like my uncle — when they see this, it will resonate and be accurate to what they experienced. But it’s one of those things that’s incredibly sensitive to get right. I think we did, but I’ll be curious to see how everybody responds to that.

And what was the most rewarding aspect?

Also Vietnam. In the finale there’s a nine-minute, unbroken shot that’s very powerful and answers the mystery of what happens in the pilot, and to be able to pull that off was extremely rewarding. I would say also getting Memphis right. We combed the historical archives of Memphis to get the skyline correct. In the background of the season is the Tennessee-Arkansas bridge being built. Those are those little details that someone that remembers ‘72 will recall. There’s a lot of kind of deep-diving details for people that will appreciate that, and then there’s all the pulp genre thrills for people that are showing up for that.

What was the best part of the process?

The part that really speaks to me about Cinemax is that they were creative partners. They approached me about directing the whole season, they had a good experience with Steven [Soderbergh] on The Knick. So coming into it, I’m taking that kind of ownership of the work. It leaves you nowhere to hide. It is you, relying only on you. That was very rewarding experience for me; I grew as an artist. And I think the fact that it’s set with the backdrop of a polarizing war, and polarizing race issues, should speak to what’s happening now. Sadly, not much has changed from 1972 to present day.

In the business side of your life, you’ve been credited with a keen amount of foresight into the future, whereas on the creative side, you have a lot of projects that take place in the past. Is that deliberate?

I actually love that I can look back and leave the tech side behind. I like getting off the crutch of a cell phone and a computer being your ways out of trouble. In our case, our prop truck had two big payphones in it so we could drop them where we needed to. It was a lot more cumbersome than just carrying around an iPhone!