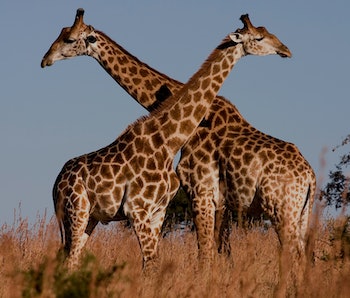 For hundreds of years, we thought we had giraffes figured out. They were tall, weird, long-necked herbivores that decorated children’s bedroom walls and represent Toys ‘R’ Us. But it turns out we were wrong.

Research published Thursday in Current Biology shows that we’ve been girracists all along: there are not one, not two, but four species of giraffes: A southern cluster of South African and Angolan giraffe, the reticulated giraffe, a northern cluster of the West African, Kordofan, and Nubian giraffe, as well as the Masai giraffe which can only really be described as a giraffe covered in marijuana leaf splotches.

Blame legendary taxonomist Carl Linnaeus for that oversight: In 1758, he classified giraffes as a single species.

Study author Axel Janke began researching the possible genetic differences between giraffes five years ago after being approached by Julian Fennessey of the Giraffe Conservation Foundation. Fennessy wanted to relocate giraffes to protected areas, but was concerned that this could lead to genetically different giraffes interbreeding. While no studies had been conclusive, previous studies had demonstrated that it was possible that there were genetic differences amount geographic clusters of giraffes.

Janke and his team figured this required some investigation, so they used nuclear and mitochondrial gene analyses to demonstrate that giraffes were not a homogenous taxon, but four distinct genetic groups. Approximately 105 giraffes were tested for nuclear markers, while 190 were tested for their mitochondrial data. The researchers believe that these four species do not mate with each other in the wild, but have interbred in captivity.

The study results will be reviewed by the International Union for Conservation of Nature’s specialist group on giraffes. The hope is that if the study gets the organization’s stamp of approval, each species of giraffe could be listed separately on the IUCN’s red list of threatened species — which may spur more extensive conservation protection. Over the past 15 years, the number of giraffes has dropped from an estimated 140,000 to 90,000.

More like this
Science
6.16.2022 3:58 PM
8 rare species thought to be extinct that actually aren't
By Jennifer Walter
Science
6.27.2022 11:00 AM
Letting your cat go outside could spread “life-threatening” parasites — new research
By Amy Wilson, Scott Wilson and The Conversation
Science
6.23.2022 6:00 PM
Reptile longevity is even more complex than we imagined — study
By Elana Spivack
Related Tags
Share: