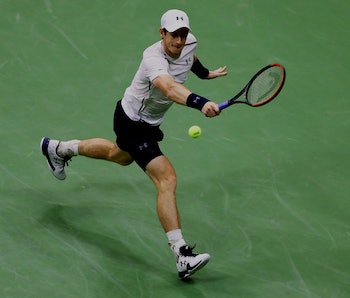 Tennis star Andy Murray lost Thursday in the U.S. Open quarterfinals to Kei Nishikori, but he really lost it early on, when the unmistakable sound of a gong rang throughout the Billie Jean King National Tennis Center.

The gong sound came as Murray hit with a backhand swing on the sixth shot of the point, causing chair umpire Marija Cicak to pause the game and the announcer to exclaim, “What is that?” Murray was, for a lack of a word, pissed — throwing his hands in the air and arguing to Cicak that when a similar sound had been heard earlier in the match she had told the players that they could play through. Her reply: “It wasn’t as loud.”

Continued play led to Murray’s defeat. It’s hard to say what factors led to the final score (the simple factor of skill, what either of them ate for breakfast) but it is fair to say that the gong-like sound could have been a total game-changer. For the record, tournament organizers said later that the sound did not in fact come from a local marching band, but from a malfunctioning courtside sound processor.

Sports psychologists agree that sound affects performance. How much the play is affected depends on the sport, the skill of the player, and whatever else is going on outside of the play. A 2011 study found that basketball player’s free throws were unaffected by audience condition, jeers hurt the performance of baseball pitches, and both cheers and jeers result in worse performance for golfers. I can be assumed that tennis players, who play in a near-silent environment like golfers, would also be less conditioned to play with random sounds.

When the noise turns up, depending on the sport, things can get bad. Take this pitcher, who was totally mentally destroyed by the jeering of Texas A&M fans:

For tennis players, the mental game it takes to stay concentrated is compounded by the fact that they are constantly switching from open to closed motor skills. An open motor skill is the reaction (hitting the ball back) while a closed skill is the action (the serve). A 2014 study from the Kyungpook National University in Korea found the mental imagery that sports players use as a cognitive strategy is weakened when an open skill is being used, compared to a closed. The sound went off when Murray was hitting the ball — meaning that he was more vulnerable to his mental game being thrown off.

More like this
Gaming
5 hours ago
Everthing we know so far about future Nintendo Switch Sports updates
By Jess Reyes
Mind and Body
3 hours ago
Most-effective core exercises: Why traditional sit-ups may not be best for your routine
By Jocelyn Solis-Moreira
Mind and Body
5.7.2022 12:00 PM
Barbell exercises might not work for everyone – here’s what to do instead
By David Rogerson and The Conversation
Related Tags
Share: