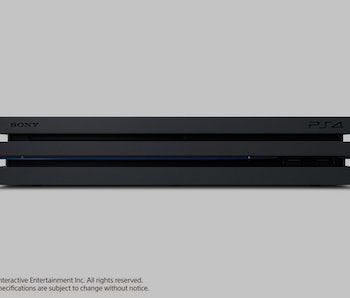 Sony unveiled the PlayStation 4 Pro — previously referred to as the PlayStation 4 Neo — alongside the Slim model for their current console today at their NYC conference. The new console is set to support PlayStation VR, 4K resolutions, HDR displays, and general improvements to HD displays as well.

As a console, the PlayStation 4 Pro has an upgraded GPU with double the power of the original PlayStation 4, and they’ve boosted the clock rate of the CPU to help maintain a steady frame rate of 60 FPS across the board. They’ve also doubled the hard drive storage capacity to 1TB total.

During the conference, Sony focused heavily on showcasing the power behind the console with both HDR (High Dynamic Range) and 4K clips from titles like Spider Man from Insomniac, For Honor from Ubisoft, and Mass Effect: Andromeda from BioWare. And, to be honest, they definitely benefited from the added power.

Sony also introduced the idea of “forward compatibility” while noting that previous games, such as Shadow of Mordor, would be receiving patches for the PlayStation 4 Pro that further increase their graphical fidelity by upping texture resolutions, introducing tessellation and additional lighting features previously not available on the console.

Many of these performance enhancements, namely 4K and HDR, will only affect you if you have a 4K or HDR-compatible monitor. Many of the base graphical updates, such as better texture resolutions and additional lighting features, will be available across the board provided you own an HD display.

For those looking for an upgraded entertainment system that doesn’t only play games, the PlayStation 4 Pro will also feature 4K and HDR support for Netflix where supported on demand, and YouTube later this year once a patch has been released to the system. The console will not, however, be able to read Ultra HD Blu-Ray discs — it will only support 4K video via streaming and applications.

All of these enhancements are packaged into the PlayStation 4 Pro for $399 on release — which is set for November 10. At launch, the new console will support 4K resolutions and HDR for Call of Duty: Infinite Warfare and Call of Duty 4 Remastered, with patches to be released for additional games like Battlefield 1 and Call of Duty: Black Ops 3* to increase their performance alongside the launch of the PS4 Pro. Each of these increases is entirely up to the development team behind the title in question, though, so there’s honestly no telling what each will look like.

The introduction of the PlayStation 4 Pro isn’t meant to split the PlayStation community, and the base console will continue to receive updates going forward — starting with a firmware update next week which brings HDR support to current consoles for all users. Titles for both consoles will be shipped via the same discs as well, so no need to worry about checking your box for a “PS4 Pro Only” sticker before heading home. For the time being, anyway.