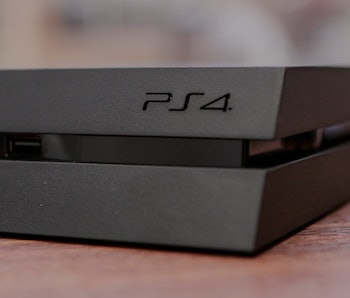 Sony’s highly anticipated PlayStation event, held today in New York City, didn’t disappoint as it revealed a slew of new technical advances coming in the near future. For those looking to take the PlayStation leap now, though, there’s the officially announced PlayStation 4 Slim — which will hit store shelves on September 15 for the extremely reasonable price of $299.

Hereafter, the PS4 Slim will become the standard PlayStation offering, as the original base model is shuffled off to resell retailers and, generally speaking, the junk pile. While the PS4 Slim was hardly the star of today’s PlayStation Meeting, there’s still something to love about this pint-sized addition to Sony’s console family.

The new PS4 Slim comes with some subtle differences from the base console. In addition to being smaller (duh), the entirely matte black body is much curvier and several small changes have been made to the outer case. USB ports are spaced further apart, for example, and the power and disc eject buttons have been clearly labeled on the front of the console.

Picking Up the Sticks

Perhaps the most exciting upgrade offered by the PS4 Slim is the subtly redesigned controller, which boasts a redesigned D-pad.

The new pad also transfers controller inputs via an entirely wired connection. This allows for a shorter duration between the button press and the on-screen action. While it’ll be minute — like the difference between a CRT and a flat screen — the improvement could make a big difference to fans of fighting titles.

The Worst Kept Secret in the Industry

Until now, Sony has refused to publicly acknowledge the aesthetic update to their base console, though the rumors have been so prevalent that it was a pretty terribly kept secret. In fact, so much was known about the console that Sony hardly wasted any time at all discussing the specifics of the PS4 Slim. Fortunately, days in advance of today’s announcement, prominent games’ reporters were posting unofficial reviews of the updated PS4 console.

A unit procured from a street date-breaking retail manager has yielded one very positive review from writer Laura Dale. Essentially, Dale explains that while the new system has some neat new features and performance-related tech upgrades, it’ll still play games the exact same way that your current PS4 does. That’s not exactly a bad thing, though.

More like this
Gaming
6.21.2022 4:27 PM
Everything you need to know about Crisis Core: Final Fantasy VII Reunion
By Hayes Madsen
Gaming
6.25.2022 2:00 PM
You need to fight the best video game villain ever on PlayStation Plus ASAP
By Mo Mozuch
Gaming
6.28.2022 6:22 PM
10 intriguing Switch game reveals from the Nintendo Direct Mini
By Robin Bea
Related Tags
Share: