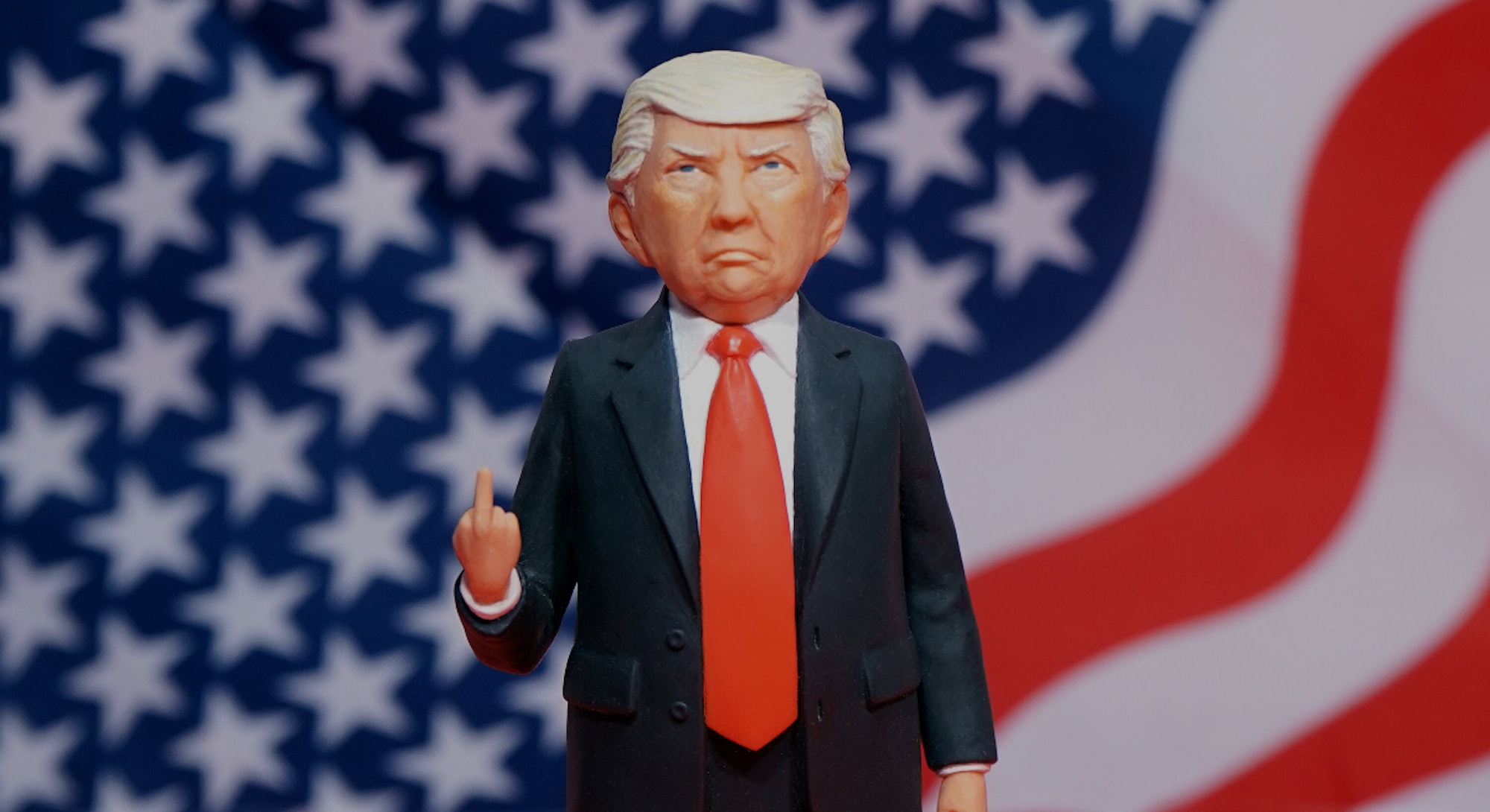 Beauty is in the eye of the beholder of the Donald Trump bird-flipping action figure: If you like the guy’s brutally un-P.C. approach to politics, you will love a doll that flips off anyone that walks by. If you think he’s a brute not fit for the presidency, well, the toy is a caricature that confirms your beliefs.

That’s the genius of toy manufacturer FCTRY, which is making a fortune off this rabidly partisan election. The company, which had already made a killing on its series of Bernie Sanders, Hillary Clinton, and President Obama earlier in the year, released a smug figure of Trump giving the middle finger last week. The demand is obvious, as the figure racked up over $20,000 in pre-sales months before it even went into production. As with the rest of FCTRY’s action figures, it made use of both crowdsourced financing and creative ideas, with Trump dolls design down to its hand size (tiny) and facial expression (frowning).

Trump’s in-your-face, say-anything campaign has inspired a huge line of novelty items and public “art.” Prominent examples include “Drumpf hats,” (via John Oliver’s Last Week Tonight), a hideous micropenised public art installation, and a dick pic mosaic. Not all, of course, are so harsh on the Republican nominee for president; for the most part, merchandise developed for 2016 election tell two different stories: the tragic tale of a millionaire clown seeking world domination, and the other, a millionaire powerhouse seeking world domination.

No matter which way you spin it, Adrienne Appell of the Toy Association notes that this election, in particular, has seen a rise in novelty items.

“This year, given the sensational nature of the election and strong opinions, you know, and Trump, I’ve seen a rise in what’s out there,” she told Inverse. “Everything from baby rattles to dog chew toys.”

FCTRY has no stake in the election as a manufacturer. With the release of the Trump doll, it’s now made money off both sides of the political aisle and has become a critical player in one of the most lucrative election cycles ever for novelty toys. Like many other retailers, creating a likeness of such a potentially dangerous candidate is offset by kicking a small portion (in FCTRY’s case, 5 percent) to a charity that Trump would hate. For the flipping-the-bird figurine, consumers voted to give some cash to Border Angels, an organization that advocates for immigration reform.

“Planned Parenthood was a close second but Border Angels of such an Untrump-y cause,” explained Gisela Michan, a rep for FCTRY. “When we made the Bernie doll [earlier this year], we gave a dollar from each sale to his campaign when it was still going.” (Right now, the Hillary doll doesn’t have a designated beneficiary.)

Anecdotally, 2016 has yielded a markedly higher influx of mocking political merchandise than any other election in our lifetimes. 2012 produced a pretty popular line of Republican candidate dolls, including unreasonably buff likenesses of Rick Perry. In 2008, a more contentious election that pit Obama and Clinton against one another in the Democratic primary, was marked by more controversial merch, ranging from cuddly Obamakinz to Schoolgirl Sarah Palin figurines. The heated 2004 election was flush with items mocking George W. Bush (the Boob Slingers Against Bush mug is now on sale for ten bucks!). While there have always been gag gifts, the explosion of e-commerce over the last 20 years has made them far more prevalent.

Prior to the 2012 election, most independently sold political commentary merchandise was via Cafepress, a precursor to Etsy that allowed independent sellers to set up their own storefronts. But even a cursory Google search indicates that the sheer volume of gag gifts related to Trump, Hillary, and Bernie are staggering in comparison to predecessors. So how much does this increase in independently-sold merchandise have to do with the fact that Donald Trump is an evil clown, and how much of it is related to how easy it is now for independent retailers to turn an offhand idea for an action figure into a crowdfunded reality?

In all likelihood, it’s a little bit of both. On one hand, theres never been a presidential candidate so outrageous as to inspire his own satirical dating site ( check out TrumpSingles if you swing that way). These ideas and products are targeting a man who has made himself into a novelty item, whether its his scam of a university, completely ghost-written book on how to be successful, or his gauche line of election gear, ranging from a #BuildTheWall tee to the completely unironic “Women for Trump” shirt for the ladies. Hillary’s got her share of ridiculous merchandise as well, but none of it approaches the shamelessness that has been synonymous with her opponent for the decades before he decided it would be fun to own the world.

This election is only the third since Twitter and other social networks became critical players in determining the election. Obama’s forward-thinking 2008 campaign owes a lot of its success to successfully targeting users on the screen they spent much of their time their day looking at, anyway. Since Obama’s first election, the tools that make FCTRY’s campaigns possible have emerged. It was only in spring 2012 that independent musician Amanda Palmer became the first person to fund a million dollar project on Kickstarter, a feat that has been accomplished by nearly two hundred projects since. GoFundMe, another popular choice to fund projects, crowd-source for surgery payments and more was only founded in 2010. As of this spring, there were 54 million members buying and selling on Etsy as opposed to the one million in 2008 — and this isn’t even to mention emerging platforms like Patreon, Bandcamp, Indiegogo, RocketHub, Crowdrise, and the myriad other tools that can turn a wannabe seller into a full-fledged retailer. Who knows how many George W. resin-cast, rigged voting machine toys would have been cast in 2000 if there was the technology to create and promote it?

Appel agrees — there are certainly more ways to get a novelty item out there than there have been in past elections: “It’s about getting the shopper where they are instead of getting them to go somewhere,” she explains, “but that’s been going on for a while. It’s about trying to get someone while in the store.”

Also helpful: The Toy Association’s annual data indicates the popularity of action figures has risen slightly in the past handful of years, rising from a yield of $1.24 billion in 2013 to $1.44 billion by the end of 2015. Collectible figurines for adults and children alike have been one of the main trends of 2016.

At the end of the day, however, she can’t help but see the connection to the personalities of the candidates and was not surprised to hear of the FCTRY figurine’s success. “Considering the voting age is 18+, these aren’t toys aren’t to educate,” she said.

FCTRY and other companies are capitalizing on the trend while its hot and contributing to good causes in the process, with the potential of an Elizabeth Warren figurine in the works and more orders for the Trump doll than they know what to do with.

“We were completely funded in less than twenty-four hours,” Michan said of the campaign rollout.

And hey, in the end, they are living out the American dream: Speaking truth to power, and making some real money off doing so.