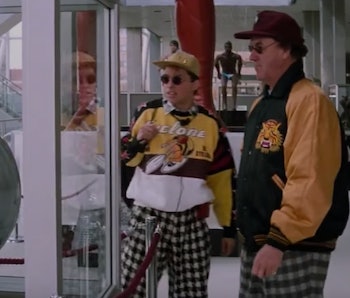 Everyone knows that Superman is faster than a speeding bullet, but the man of steel has a lesser-known talent — a single strand of his hair can carry a 1,000-pound weight. While that may sound like comic-book fiction, modern materials make Superman’s hair look weaker than Batman V. Superman: Dawn of Justice’s critical reception.

Thanks to a new fan-made trailer that pits Michael Keaton’s Batman against Christopher Reeves’s Superman, we have a few retro looks at Superman’s old power set, like his ultra-strong hair from Superman IV: The Quest for Peace.

Considering normal human hair for a moment, it’s not terribly surprising that a single strand can’t withstand a whole lot of weight. But when we talk about locks of hair, we start to see some serious holding power. A lock of 100 strands of hair, for example, can hold up to 22 pounds. The average head of human hair, all together, can hold up to 12 tons.

Hair is no joke, that’s for sure. But which materials come close to the purported tensile strength of Superman’s hair without being terribly thick, like a parachute cord or an entire head of hair?

Spider’s silk is incredibly strong. Though extremely thin and light, tensile strength tests of spider’s silk from different species have yielded strength measurements of up to 1 GPa (gigapascal), a unit translating to over 150,000 psi. That doesn’t mean that a single strand of spider silk can hold 150,000 pounds, but it’s still an incredible amount of tensile strength from something that people accidentally walk into because it’s so hard to see.

Strands of Kevlar are slightly thicker. Kevlar is the brand name given to aramid fibers, which have been used in building ultra-strong structures, from suspension bridges to spacecraft. They’re crazy strong and come in a variety of forms (braided, woven, and so on), and range from 1 mm to 250 mm (about 9 inches) in thickness. But here’s where Kevlar gets really crazy: Some single fibers have been strength-rated up to 1,500 tons. That makes Superman’s hair look like Steve Rodgers, pre-Super Serum.

We can’t know the exact tensile strength of Superman’s hair, but we do know it’s stronger than regular human hair, which, while amazing, doesn’t quite measure up. That said, there are some very thin fibers out there that are so strong they put superhero hair to shame.