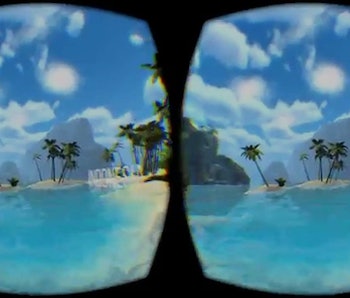 ASMR and VR are in a relationship, and their offspring is super cute. In the past two years, the disparate communities have grown in prominence and popularity while rarely meeting, but the emergence of VR and immersive media consultation firm PixelWhipt and ASMR creator Ally Maque’s vision to bring the two together has resulted in an entirely new way of freaking out and inspiring people on the internet.

To marry two subcultures, you need to effectively combine two concepts. First there’s the phenomenon of ASMR, or “auto sensory meridian response,” around which a group of users has built a therapeutic YouTube community. ASMR-tists, as they sometimes calls themselves, make their listeners’ scalps and spines “tingle” by whispering softly and performing a number of aural and visual triggers that help them relax. (And no, it’s not a sex thing, most of the time.) To the untrained viewer the phenomenon can be baffling and a little creepy, but ASMR has been conversely parodied and hailed as brilliant for long enough to be familiar to a large swath of internet users. While it hasn’t yet been explained scientifically, ASMR videos can garner millions of views and praise from its audience as a useful holistic tool to unwind at the end of the day.

Then there’s VR (“virtual reality,” natch), whose expanse beyond the Oculus Rift and into the world of gaming has lit a fire under the collective ass of creative professionals, leading to more VR original content and even full-fledged webseries. The Oculus Rift was first brought to the global stage when Facebook purchased the company months before PixelWhipt was founded in 2014, with special enthusiasm from the world’s most high-profile VR fan, Mark Zuckerberg.

“By feeling truly present, you can share unbounded spaces and experiences with the people in your life,” Zuckerberg, destroyer of Winklevosses, said at the time of Facebook’s Oculus Rift acquisition. “Imagine sharing not just moments with your friends online, but entire experiences and adventures.”

From there, the VR community has become deeply entrenched in the world of gaming, military and even fashion, but had yet to be taken on like scrappy members of communities as specific as ASMR-tists and their listeners.

So what does a user have to gain from combining the ‘creepy whisper videos’ with a cumbersome headset? Ally Maque (username: ASMRrequests) was the only person to see the potential, but a few years out she’s changed the game with a series of sci-fi and fantasy ASMR videos and an entire company (PixelWhipt) dedicated to the marriage of the two communities. The company targets advertisers looking to get ahead of the curve with VR, and pitches itself as such on the PixelWhipt website:

PixelWhipt, founded by Maque and her boyfriend, pays its bills by consulting individual creatives and larger companies on how to create a unique immersive campaign versus a perfunctory, basic use of the technology.

Is Maque a creative visionary with an eye for business and the foresight to collaborate? Yes. Do I have a crush on her? Yes, without doubt, oh my god. But this aside, she’s become a serious player in the ASMR community, and she’s now an emerging voice in the often cacophonous world of VR tech bros.

Before PixelWhipt became a cornerstone of the ASMR community, Maque set herself apart from other ASMR-tists early by combining high-concept sci-fi with traditional whispering techniques. Her first huge success began with the first installment of the Departure series in early 2013, which features Maque as a soft-spoken intergalactic travel agent.

Fast forward two years, through a million dropped hints in Ally’s vlogs about her fascination with VR technology, and the first major experiment in VR-ASMR crossover debuted, featuring Maque and other ASMR heavy hitters Heather Feather and Maria of GentleWhispering. The production intensive concept resulted in the fantasy video The K3YS, a three-part series that featured each member of the trio performing material they wrote to their own strengths. All content is best enjoyed through an Oculus Rift-style headset, but YouTube and Facebook have developed technology that allow the everyday viewer to scroll through the video and enjoy it from all sides, if in a slightly less immersive environment. Following this series’ success, Heather Feather and Maria remained on the team to work on subsequent series that featured simpler enclosures, including a would-be art studio while Maque continued to develop more intensive concepts including that of DotCalm, another sci-fi relaxation technique.

As Maques’s zeal for experimentation was encouraged by her own audience, the practical popularity of VR had taken off it its own right. Between PixelWhipt’s founding in 2014 and the present, the technology has been carefully tiptoeing toward our everyday lives with major endorsements and integration from Sony Playstation (their headset is released next month), as well as the development of more affordable and lightweight equipment. Sure, it still feels a little pie in the sky now for a VR headset to become a major consumer product, but there was a time when a VCR could set you back three hundred bucks.

Putting ASMR and VR technology together was not just a terrific way for Maque to develop a proof of concept for PixelWhipt, whose primary goal is to help advertisers develop their own immersive media campaigns, but a far more logical jump than it appears. Most ASMR fans tune into their favorite personalities (the more soothing your voice and interesting your concepts the better, in general) to be removed from their everyday lives, and the one step further of trying to remove a viewer from their plan altogether only heightens the experience further. The objective of ASMR creators, by and large, is to recreate a familiar and comforting experience, and VR offers the luxury of putting you in the salon chair, racecar bed, or library circulation desk, depending on your pleasure.

“Talk about bringing asmr to the next level. What’s next? Smell? I feel like I’m there,” said a user on the DotCalm video.

Over two years into the PixelWhipt’s history, Maque has reenergized the ASMR community, whose cosplays and longform whisper videos had begun to grow stale. Since The K3YS, other users have begun to purchase the equipment necessary to develop their own VR ideas to positive reception in the community, though they tend to stay rooted in more traditional ASMR settings (think relaxing everyday spots like libraries, spas, bedrooms, hair salons, etc.) Virtual reality continues to become a more prominent part of the subculture as ASMR as a phenomenon continues to grow in popularity, and has given Maque the opportunity to develop a satisfying if insanely specific career with her boyfriend while raising a son, all before hitting thirty.

There are a number of factors that will determine the length that ASMR and VR can continue to bond - the reach of auto-sensory meridian response will be limited until it receives a scientific endorsement, and the bounds of VR creativity are constantly in peril depending on how much the technology is experimented with versus how much its reign-holders decide to use it for less expensive endeavors. Maque has hinted at another high-concept project that’s been in the works with Heather Feather and GentleWhispering for months, but no release date has been announced yet. Will the world get over the appeal of beautiful women whispering sweet nothings to them in inventive 360 environments? Is there a ceiling for this, and when do we know we’ve hit it?

While we wait to find out if ASMR-VR is the future or a mere mark of the times, there’s plenty to see and listen to - you just may have to strain your ears.