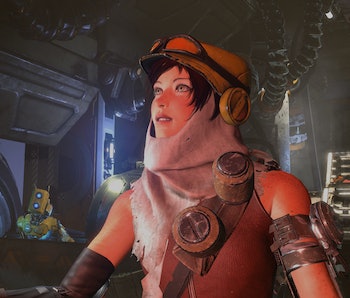 A quick glance at the beautiful but complicated ReCore engenders a lot of questions. Who is the protagonist? What are those robot dogs? Why does this look like Bionic Commando? ReCore feels overwhelming in a year already full of great games, so is ReCore even worth your attention? It might be, if you take a few moments to learn what it’s all about.

Created by Keiji Inafune, who has had a bit of a tough year after the disappointment of Mighty No. 9, ReCore is a sci-fi shooter/platformer set in “Far Eden,” a desert world meant to become humanity’s new home. Players take control of Joule Adams, a colonist who wakes up from 200-year cyro-sleep to find Far Eden has not been terraformed as mankind hoped. It’s up to Joule and Mack, Joule’s faithful Corebot — sentient bots that aid Joule in puzzle-solving and combat — to save the human race.

1) Corebots are your new best friends — and your enemies.

All colonists like Joule have a Corebot that reflect their personalities. Players begin ReCore with Mack, Joule’s personal Corebot, but traversing Far Eden leads Joule to encounter Corebots that were supposed to terraform Far Eden but, mysteriously, have gone rogue.

While some Corebots seek to destroy you, at least five will become Joule’s new allies, enabling her to perform new actions as she journeys deep into Far Eden.

When accompanied by a Corebot, they assist you in combat, meaning you can focus on important targets without having to bother with smaller, weaker enemies that could, in other instances, become overwhelming.

2) Every Corebot A.I. has different personalities and abilities.

Some A.I. still aren’t known, but the ones we do know are: Seth, a spider-like yellow A.I. who picks enemies from a distance; Duncan, an ape-like red A.I. who crushes enemies up close; and Max, a dog-like blue A.I. that finishes off stunned enemies.

3) ReCore is meant to be a modern throwback to 2D action platformers.

ReCore is a 3D third-person action adventure game, but it comes loaded with platforming elements that may remind players of a simpler, bygone era. That’s by design; in talking to IGN at Gamescom 2016, Inafune said ReCore is meant to be reminiscent of 2D platformers with a heavily modern spin. “We really wanted to tap into that arcade heritage, and make it feel like a game in the truest sense.”

4) The world is vast and open.

Many modern games have adopted an open-world structure, as opposed to traditional “levels” like in games ReCore is attempting to homage. Despite its throwbacks, ReCore is structurally similar to modern Grand Theft Auto and the new Tomb Raider games. In ReCore, players explore the vast, open Far Eden deserts with “dungeons,” where the game’s traditional platforming really kicks in. It’s up to players how to proceed.

Unlike most shooter games, you won’t have to bother collecting a lot of ammo, as Joule’s primary weapon only needs a brief “recharge” as opposed to a legit reload. But your primary weapon only scratches the game’s toughest enemies. You’ll have to think real hard and mix up attack methods (i.e., other weapons and Corebots you encounter) to vanquish foes.

6) Matching your ammo to your enemies’ colors inflict more damage.

Remember like ten seconds ago when I said you have to strategize? Using the D-pad, players are able to swap out ammo for ones of different color, which also coordinate with Corebots. When fighting enemies, they’ll also be of a specific color. Matching your ammo and Corebots to the target will enable you to deal out great deals of damage.

7) You probably shouldn’t kill ALL your enemies…

Unique to ReCore is the ability to take out an enemy’s core for upgrades to your weapons and Corebots. Instead of destroying an enemy by depleting their health meter completely (although you still can), if your enemy is weak enough you can use the extractor — a long cable Joule uses like she’s Spider-Man — which activates a tug-of-war minigame to rip out and harvest the core. I wonder if that’s where the title comes from.

ReCore will be available exclusively on Xbox One and PC on September 13.