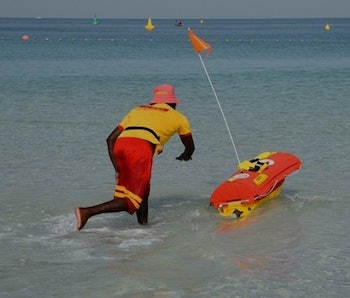 The ocean is fast becoming the premier testing site for robots. That trend continues with the news that Dubai will start using robotic lifeguards to save endangered swimmers who might perish before a human could reach them.

These robot saviors are capable of reaching top speeds of 35 kilometers per hour, according to the National, which reports that this is 12 times faster than humans can swim. The machines will be made from recycled parts and can be remotely controlled by a human pilot tasked with leading the floating devices.

Alya Al Harmoudi, the director of Dubai’s Environment Department, said in a statement that development of the robot lifeguards was a “response to the Dubai government directives to keep up with the latest technologies and innovations” and that they should “ensure that all the necessary requirements and precautions are in place to enhance the rescue operations on the public beaches of Dubai.”

These lifeguards join many other robots in braving the Earth’s oceans. People are also targeting invasive lionfish with robot killers and on robot boats designed to predict El Niño by measuring water temperatures.

Others are working on autonomous ships to modernize international trade and vessels designed to hunt down submarines that could eventually become the future of marine warfare.

Robot lifeguards are much smaller than most of those other experiments, but they could also have the most impact on the average person. Drowning isn’t fun, and a mechanical ship can reach people much faster than a human ever could, thus allowing it to (hopefully) save more lives than their biological counterparts.

More like this
Innovation
5.13.2022 11:00 AM
These robots have one special skill that could make human chefs obsolete
By Sascha Brodsky
Innovation
5.12.2022 6:00 PM
Star Wars: A robotics expert reveals the The Mandalorian's biggest flaw
By Sarah Wells
Science
5.5.2022 11:00 AM
Webb Telescope alignment and more: Understand the world through 7 images
By Robin Bea
Related Tags
Share: