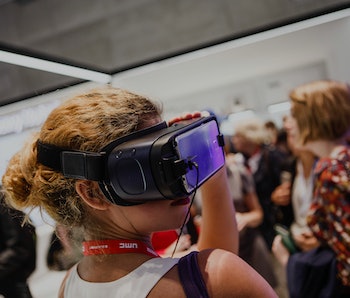 The annual IFA — Internationale Funkausstellung Berlin — convention in Berlin, Germany is sort of the CES of Europe in that it offers technology companies the chance to present the latest consumer-ready products to the masses over the course of a few days in the late summer. The first one was held back in 1924 and was known as the “Berlin Radio Show” and we’d be remiss if we didn’t, right at the top, include this photo from 1930 of Albert Einstein opening up that year’s convention:

With that bit of perspective, we can focus on this year’s convention, which began Friday and will run through Wednesday and is big on virtual reality, robots, screens of all sizes and curvatures, and underwater phones.

The setting is the Berlin ExpoCenter City. Some 240,000 people show up over the six days. Most are German — 63,000 come from outside the country — to see 1,600 products from some exhibitors. Convention statistics claim $4.67 billion in orders are placed during the convention.

A visitor tests the waterproof S7 from Samsung. The South Korean company had to begin a recall of the phones on Friday though, after batteries were found to be explosive.

A visitor tests the waterproof S7 from Samsung at IFA 2016.

There was regular virtual reality:

And there was suspended virtual reality:

There were dreamy screens:

And of course, there were robots:

More like this
Innovation
7.1.2022 10:00 AM
Robots are ready to get touchy-feely
By Sarah Wells
Innovation
6.21.2022 11:00 AM
No, Google’s Deepmind isn’t on the verge of human-like reasoning
By Tristan Greene and Undark
Science
6.25.2022 4:00 PM
Voyager: 12 spectacular images from NASA's longest-lasting mission
By Jennifer Walter
Related Tags
Share: