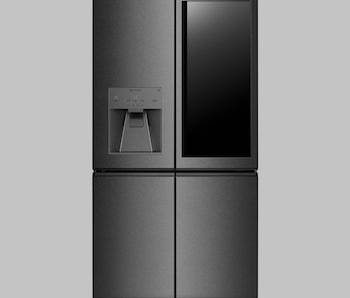 Can’t eat wheat? Don’t eat meat? LG’s latest smart fridge, the InstaView Door-in-Door, could save the day. The appliance has a giant 29-inch touchscreen display that’s also translucent, allowing household members to look in the fridge without actually opening the door. Better yet, the screen can display apps over the translucent view, so others can leave virtual notes over which shelves allergy sufferers should avoid.

The Verge reported on Friday that the model at IFA 2016, a European tech show taking place until Wednesday, had an LG-developed sticky note app. The app is ideal for marking which foods are safe, as it overlays with the translucent view inside the fridge. Beyond LG’s repertoire of kitchen-specific programs, like a timer and recipe viewer, the fridge runs full Windows 10, backed with 2GB of RAM and an Intel Atom processor. That means developers can hop on the bandwagon and come up with all sorts of apps to overlay on the door.

“IFA is a great venue for showcasing our newest home appliances because this is where the best in the industry all come together,” said Jo Seong-jin, president of LG electronics, in a statement. “LG’s advanced kitchen appliances are second to none when it comes to the modern consumer’s home dining experience.”

Unfortunately, LG is remaining tight-lipped about release dates or pricing, but the company’s current smart lineup isn’t cheap. A previous model with LG’s translucent front window (minus the Windows 10 computer) costs upwards of $4,000, suggesting that when this new model hits the stores, it’s going to cost a pretty penny. The smart home imagined in the 1950s may have finally arrived, thanks to innovations like the smart fridge and Roomba, but with high prices like these, it’s going to be a long time before they’re a staple of the average home.

More like this
Mind and Body
3 hours ago
How music makes you feel may depend less on your brain than scientists once thought — study
By Allison Parshall
Science
6.27.2022 11:00 AM
Letting your cat go outside could spread “life-threatening” parasites — new research
By Amy Wilson, Scott Wilson and The Conversation
Science
6.26.2022 11:00 PM
The powerhouse of the cell has a more complicated origin than we thought
By Viviane Callier and Knowable Magazine
Related Tags
Share: