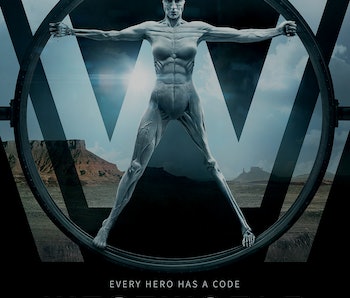 HBO just released the official Westworld poster, and it focuses on something different than what we’ve seen in the trailers so far.

We’re big fans of the moody, techno-surreal trailers for HBO’s newest show about robots run amok in a theme park of the future meant to resemble the old west. But a slight problem is that these looks at the show mostly haven’t bothered differentiating between which characters are human and which characters are the humanoid A.I. created by Anthony Hopkins’s mad scientist Dr. Robert Ford. Knowing the subtext of the show and the brain-twisting habits of co-creator Jonathan Nolan and executive producer J.J. Abrams that’s entirely the point.

So it’s interesting that they’d choose to go with a Vitruvian Man-esque poster image that emphasizes the skeleton and synthetic skin of the robots before they’re all gussied up and given artificial intelligence and western garb. It’s a striking image for sure, with the skeleton blending into the skin and the robot staring straight at you. Could this be Evan Rachel Wood’s character, the robot Dolores Abernathy?

Decide for yourself below:

From the quick peeks in the trailers we’ve seen this is all part of how Ford and Jeffrey Wright’s head of engineering character, Bernard Lowe, manufacture the robots behind the scenes. The robo-skeletons are dipped in some kind of milky bath and a few steps later they’re good to go.

It’s also worth noting that the feel of the poster and the new show is going way more serious than director Michael Crichton’s 1973 original. Where the film still dealt with serious questions about humanity, it definitely had a more of a sense of humor than the show will. We love Yul Brynner’s mean robo-mug in the original poster below, which also gives you a sense of the lighter feel.