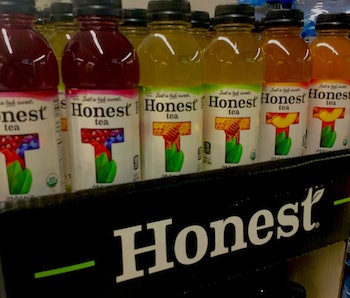 If you encountered a bottle of Honest Tea on the street, and payment was requested, but not enforced — would you still shell out the cash? That’s what the masterminds behind the organic, fruity side of the Coca Cola conglomerate are currently trying to figure out via an advertising gimmick slash social psychology experiment taking place in London. The beverage firm is setting up racks of tea in eight neighborhoods, each with a sign requesting a payment of one British pound.

By the time the experiment is over, Honest Tea hopes to have an idea of which London neighborhood is the “most” honest. It’s an experiment that the company has conducted for the past seven years. When it was carried out in 24 U.S. cities this year, the results revealed that Honolulu, Hawaii was the most honest, with a 100 percent payment rate. In contrast, Denver, Colorado was the worst, with a payment rate of 83 percent. Somewhere in the middle was Washington, D.C., where 88 percent of people willingly paid — even though one thirsty person actually tried to steal all the money there.

“We step back to see how honest people are,” Seth Goldman, co-founder of Honest Tea, tells The Washington Post. “It creates all these stories about whose neighborhood is most honest.”

While it’s a fun way to get people to drink tea, the Honest Tea experiment is a very bad way to gauge actual honesty. The short explanation is that the spread of human jerks is ubiquitous, unconfined to any region. Noting that 90 percent of Chicagoans paid for their tea compared to 95 percent of people in San Francisco doesn’t mean that these areas are populated by more honest people — it just means that the people who either wanted to pay (or let’s be real, could pay) showed up that day.

There’s data to back this up as well. Multiple studies have tried to determine whether certain countries are more honest than others: A 2015 University of Exeter study had 1,500 participants from 15 countries take part in two honesty experiments with incentivized winnings. What they found was evidence of dishonesty in all the countries, with levels that changed across cities. In one experiment, certain countries appeared to be very dishonest, and in the next, extremely honest. There was no pattern other than survey results revealing that people thought their own country would likely be the most dishonest one.

The more influential factor at play, rather than a person’s provenance, is human nature. People have been statistically proven to be less honest when there is no supervision. Our trustworthiness can be modified for the better; a 2006 study found that when people were given the option to pay, much like in the Honest Tea experiment, they were 2.76 times more likely to pay up if the money box was accompanied with a picture of watching eyes. But as for where displays of honesty are going to show up? Honestly, we have no idea.