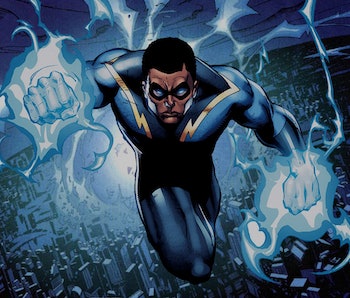 One of the first major black superheroes ever written is getting a TV adaptation from The Game and Being Mary Jane creator Mara Brock Akil, and her husband Salim Akil. The couple will collaborate with Greg Berlanti, who oversees the CW’s DC superhero universe, to bring DC’s Black Lightning to TV networks.

According to Deadline, Akil’s Black Lightning story centers around Jefferson Pierce, who hung up his Black Lightning alter-ego to retire into civilian life. However, after his daughter becomes embroiled in a hunt for justice, and a star student becomes involved with gangs, Jefferson must once again don his suit to become Black Lightning.

The character made his original debut in 1977 as one of DC’s first black superheroes. Like in the planned TV show, Jefferson had two daughters in the comic books, both of whom became superheroes in the DC universe. Anissa Pierce became the hero known as Thunder and joined The Outsiders, while her sister Jennifer Pierce became the hero Lightning, and joined the Justice Society of America.

Black Lightning has previously appeared in various forms across DC’s animated universe including Batman: The Brave and the Bold, an original DC Nation short, and the popular Cartoon Network series Young Justice.

Black Lightning isn’t officially attached to any network, having been developed within Warner Bros. Television. Whether it joins the CW’s large superhero universe or not, Black Lightning will likely be a dramatic new show, joining other prominent African-American superheroes on TV like Netflix’s Luke Cage, and CW’s Vixen.