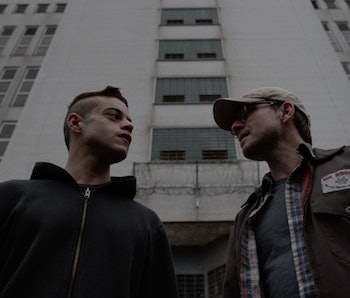 The grumblings of “too many superhero” movies undermines the flexibility of the genre. Sure, Guardians of the Galaxy was a pulpy space opera and Batman v Superman was a mess. But whether by intention or coincidence, a handful of great non-superhero shows have adopted the tropes – some no better than Mr. Robot.

In “eps2.7_init_5.fve,” Elliot’s (Rami Malek) brash conscience in the shape of his father (Christian Slater) morphs into a full-blown alternate persona. Like eating a mushroom in Super Mario Bros., Elliot loses his anxious vulnerability and turns into the alpha-male commander who hacked the largest corporation in the world.

Granted early release from prison — if you were wondering why he was sentenced, it was for hacking and stealing the identity of his therapist’s shitty boyfriend — Elliot briefly attempts to normalize before discovering Mr. Robot has immediately taken control back of fsociety – or what’s left of it – from Darlene (Carly Chaikan), who’s more than willing to surrender.

Like Darlene’s act of murder last week (side note: turns out she didn’t kill Cisco, for some reason), Mr. Robot as a power-up, reminiscent of Nikki and her alter-ego Jessica in Heroes or Bruce Banner and the Hulk, seemed like an inevitability. Slater’s performance in Season 2 has been especially brash and, often literally, in your face. He’s the IT guy you don’t piss off because he always knows a little more about you than you’d care to acknowledge. Never mind that he’s only ever been in Elliot’s brain. In Season 2, the monster is coming out.

As Mr. Robot becomes hacker Jekyll & Hyde, it has impressively not neglected its strong supporting characters, Darlene in particular. Even in unimportant scenes where she’s got nothing to do but stand around, her body language and presence speak volumes. Imagine having to carry on the work after the largest hack in history without the help of the person(s) who pulled it off. With a lesser actress Darlene would look bored. Through Carly Chaikan, Darlene has had enough.

It’s a little bizarre that Christian Slater as Elliot’s Hulk is keeping Season 2 of Mr. Robot fresh. The show’s sophomore year could have been its downfall: Wayward Pines, another acclaimed series from 2015, limped through its second season and now, no one gives a shit. In order to stay alive, Mr. Robot has begun a stealth transformation into something more powerful.

More like this
Culture
Jan. 31, 2023
A Delightful New Hulu Show Finally Figured Out the Superhero Sitcom
By Dais Johnston
Entertainment
Feb. 2, 2023
The DC Universe is Taking the HBO Approach With Its TV Shows
By Dais Johnston
Entertainment
Feb. 2, 2023
7 DC Movies and TV Shows We Won't See Under James Gunn
By Eric Francisco
LEARN SOMETHING NEW EVERY DAY.
Related Tags
Share: